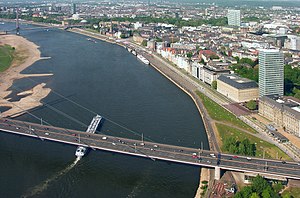 The Rheinkniebrücke is the bend in the Rhine in Dusseldorf on the Rhine leading cable-stayed bridge with a six-lane dual carriageway and two combined foot and cycle paths, which was presented on 16 October 1969 the traffic.

Together with the Oberkassel Bridge one kilometer downstream and the Theodor Heuss Bridge three kilometers downstream, it forms the original Düsseldorf bridge family , which has significantly influenced the development of the cable-stayed bridge for many years. The next Rhine bridge upstream is the Hammer Railway Bridge , which is about 2.7 kilometers as the crow flies to the southwest and can be reached via the river after about five kilometers. At this point there has been a railway bridge since 1870 and at the same time the oldest fixed Rhine bridge in Düsseldorf.

The entire bridge, including the access ramps and distribution lanes, is 1,519 meters long. The actual cable-stayed bridge is 561 meters long and 28.9 meters wide. It has a single pylon with two free-standing and 114 meter high vertical stems, which stands on the left bank of the Rhine on the bank of the flood bed. Four harp-shaped ropes are stretched from each of the handles to the continuous bridge deck hanging between the handles. The steel bridge deck is constructed as an orthotropic plate with cantilevered sidewalks and bike paths, in the shadow of which the 3.40 meter high main girder should appear as slim as possible. The main opening of the bridge, which extends from the pylon over the Rhine, has a span of 319 meters, while the other part above the flood bed is significantly shorter and supported by narrow pillars under the rope anchorages. The arrangement of the ropes is therefore not symmetrical in the longitudinal direction, the ropes over the flood bed are stretched much more steeply than those over the main opening.

The road bridge has two directional lanes with three lanes each and a combined pedestrian and bike path on the outside. The street lighting is suspended from a suspension cable (chain system) between widely spaced vertical masts. On the left bank of the Rhine, the main carriageways lead into the Rheinalleetunnel , which creates a connection to federal highway 7 and then the A 52 motorway . As part of the bridge, two curved ramp bridges branch off to the side on the Oberkassel side, which enable access as an extension of Kaiser-Wilhelm-Ring to the main bridge and a descent from the main bridge, which continues straight into Düsseldorfer Straße . The bridge ends on the right bank of the Rhine at the level of the waterway and provides a connection to Friedrichstadt and to the through streets Elisabethstraße , Friedrichstraße and Corneliusstraße running there in a north-south direction . On the right bank of the Rhine, the bridge also has two ramp bridges branching off to the side, via which there is a direct connection to the Rhine bank tunnel and to the city ​​center .

The idea of ​​a further east-west connection across the Rhine had existed since 1912. At that time, the architect Bruno Schmitz and the civil engineer Otto Blum proposed nine Rhine bridges in their award-winning competition design for an overall development plan for the city of Düsseldorf , including a new bridge at the bend in the Rhine to handle future east-west traffic in Düsseldorf. In a memorandum, Bridges for Düsseldorf , presented in October 1951 , the head of the Düsseldorf City Planning Office and architect Friedrich Tamms made concrete plans for bridges, including the "knee bridge", which is called the "knee bridge" in the working title. The necessity of the bridge was justified with the strongly increasing car traffic . First, the Theodor Heuss Bridge, planned by Fritz Leonhardt and modified according to Tamms' ideas, was opened to traffic in 1957. Then Tamms also commissioned the planning of the Oberkassel Bridge and the Rheinkniebrücke, with Fritz Leonhardt being in charge of the Rheinkniebrücke and the responsible department head as the architect responsible for the formal design . In the years 1961–62 a second memorandum on Bridges for Düsseldorf was created , in which the further developed planning and traffic calculation of the "Kniebrücke" were presented. Since for economic reasons only a cable-stayed bridge came into question for the required span and Tamms did not want to disturb the cityscape with pylons on the right bank, it was decided to use a single-hip bridge with two pylon posts on the left bank ("cable-braced girder bridge"). The close relationship between the three bridges resulted not only from the cooperation of all those involved in the short planning period, but was also promoted by Tamms. Leonhardt had planned pylon posts made of reinforced concrete, but due to a special suggestion from the Düsseldorf steel construction company Hein, Lehmann & Co. AG , Tamms made revised steel bars.

The concrete decision to build the bridge was made in 1962. In order to carry out the overall planning, which had to be coordinated with the state government and the then Prime Minister Franz Meyers due to the proximity of the bridge to the State Chancellery of North Rhine-Westphalia in the Villa Horion , a reallocation was carried out according to the then new Federal Building Act. On the Oberkassel side, there was also the problem of annoyance to residents on Rheinallee due to noise and exhaust gases, which was solved by building the Rheinallee tunnel. Construction work began in 1965 and on October 16, 1969, the Rheinkniebrücke was opened to traffic as a stay cable construction with what was then the longest main span in the world.

In 1997 the Roncalli Apollo Varieté was opened on the right bank of the Rhine directly under the Kniebrücke . A large number of the exposed aggregate concrete columns under the Rheinkniebrücke were provided with black stick figures of the graffiti and street artist Harald Naegeli , who became known as the “Sprayer von Zürich ” .

In 2019, the Kniebrücke got into the media because the city administration had Wackersteine placed under the bridge to prevent the bridge from being used as a place to stay for the homeless .