The Düsseldorf – Elberfeld railway is a 27-kilometer railway line between the main stations in Düsseldorf and Wuppertal , which also runs through Erkrath and Haan . In her intercourse regional express trains with an additional stop at Bahnhof Wuppertal-Vohwinkel and commuter trains operate, the nine other breakpoints. The railway line, which has been in full operation since 1841, was the main line of the Düsseldorf-Elberfelder Eisenbahn-Gesellschaft (DEE) founded in 1835 .

The Düsseldorf-Elberfelder Eisenbahn-Gesellschaft was founded in October 1835 in order to realize the idea of ​​a railway connection between Düsseldorf and Elberfeld , which dates back to 1832 . With the confirmation of the founding statute by the Prussian government on September 23, 1837, the company obtained the concession to build and operate the line. The construction of the first 8.12 kilometers long section from Düsseldorf to Erkrath train station began on April 9, 1838. The commissioning for passenger traffic took place on October 15, 1838, the birthday of Crown Prince Friedrich Wilhelm . Freight traffic began on December 20, 1838. Thus, this section was the first steam-powered railway line in western Germany and the fifth steam-powered railway line in all of Germany.

The 12.61 kilometer section between the Erkrath and Vohwinkel stations was put into operation on April 10, 1841. Another 5.45 kilometers to today's Wuppertal-Steinbeck train station followed on September 3, 1841. Initially, only goods were transported on the extensions. The extended passenger traffic began only after the completion of the entire line on December 1, 1841. After the Bergisch-Märkische Eisenbahn-Gesellschaft (BME) took over the line in 1857, it expanded the line to double-track until 1865. In 1866, the BME took over the Aachen-Düsseldorf-Ruhrorter Eisenbahn , the Mönchengladbach-Düsseldorf railway line operated by it, and in April 1868 began construction of the Hammer railway bridge , which was inaugurated on July 24, 1870. Even before the opening of Düsseldorf's central or main train station in 1891, an east-west rail link crossing the Rhine between Düsseldorf and Neuss was established , on which the Düsseldorf – Elberfeld railway played a central role.

To mark the 100th anniversary of the line's opening, the Reichsbahndirektion Wuppertal and the Heimatverein Düsseldorfer Jonges erected a plaque "in memory of determined pioneers in the German economy". The relief by the Düsseldorf sculptor Emil Jungblut (born June 11, 1888, † April 24, 1955) is now in the north tunnel of Düsseldorf Central Station, depicts two men in the foreground - one of them a worker - and in the background the Erkrath steep ramp, which is driven by a steam locomotive - Hochdahl . Above are the words "On December 20, 1838, the first railway in West Germany ran from Düsseldorf to Erkrath."

The original route in the Düsseldorf city area differed from the current route. Immediately to the east of the junction with the Troisdorf – Mülheim-Speldorf railway line , the route continued straight ahead in a precisely westerly direction and thus south of the Höherweg road and also along the southern edge of today's Höherweg car mile . This section of the route still run sidings , including the level same level crossing on the Ronsdorfer street belongs. Further to the west is the Schwanenhöfe office center on Erkrather Strasse , the eastern section of Kiefernstrasse , the Handelszentrum / Moskauer Strasse subway station and today's central station on the route of the former section. The Düsseldorf DEE train station - later called Bergisch-Märkischer Bahnhof - was located at the southern end of today's Königsallee , which earlier ended on Bahnstrasse - at that time a street running north parallel to the railway line. Further to the west, directly on the Rhine, was the Düsseldorf Rheinknie train station , where passengers could get off after using a ferry in order to make their journey at Obercassel Rheinstation train station on the Mönchengladbach – Düsseldorf railway line with trains of the Aachen-Neuss-Düsseldorfer Eisenbahn-Gesellschaft in the direction of Neuss, Mönchengladbach and Aachen to continue. The end point of the route was initially at the port . After the commissioning of the Hammer railway bridge, the line was extended to the Neusser Vorbahnhof northeast of today's S-Bahn station Neuss Am Kaiser .

After the three railway companies, which operated their own routes and stations in Düsseldorf, were nationalized in 1879 ( CME ), 1880 ( RhE ) and 1882 ( BME ) and the Prussian State Railways , which already had large shares (CME 74, BME 64 and RhE 42 percent) owned the companies that took over their assets and operations, it was necessary to merge the three stations for operational reasons. Because the Bergisch-Märkische and Köln-Mindener train stations stood in the way of expanding the city to the south, building Friedrichstadt , the new central train station was built on the south-eastern border of the city ​​center with Oberbilk and inaugurated and put into operation on October 1, 1891. This new building also required some new routes for the existing railway lines. This is how the Düsseldorf – Elberfeld railway line received its current route.

From the perspective of the time, the new route from the newly built central station initially ran in a north-west direction along the existing route of the main line of the Cologne-Mindener Eisenbahn-Gesellschaft to the Wehrhahn CME junction . There it swung to the east and followed the already existing route of the Düsseltalbahn of the Rheinische Eisenbahn-Gesellschaft . East of the junction with the Troisdorf – Mülheim-Speldorf railway line , it then met again on its own original route. By the way, at this point the original route of the Düsseltalbahn swiveled to the northeast and then ran to its own Gerresheim RhE station and on to Mettmann . This route was also abandoned in 1891 and the trains via Mettmann to Wuppertal (today S-Bahn line 28 to Mettmann) instead took the parallel Düsseldorf – Elberfeld line and the Gerresheim BME station, which is still an S-Bahn stop today . 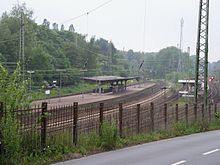 Haan-Gruiten station , on the left the railway line to Solingen , in the middle next to it the S-Bahn tracks with platform and on the right in front the tracks of the long-distance railway line

The greatest difficulty in building the route was overcoming the difference in altitude of 82 meters over 2.5 kilometers between Erkrath and Hochdahl. Because of the gradient of 33.3 ‰, this section could only be overcome for a long time with the help of a cable system, initially driven by a stationary steam engine , a little later with a locomotive traveling downhill on a specially built third track. From 1926, additional pre-tensioning or pushing locomotives were used in place of the cables . The steep ramp was electrified in 1963 and was then only double-tracked again until a third track was added again in 1985 due to the planned S-Bahn operation. In 1988 the track in the direction of Wuppertal was assigned to the newly built S-Bahn line.

The route is of central importance for the connection of the city of Wuppertal to regional and long-distance traffic. All EC / IC and ICE connections in the city run along the regional express line RE 7 ( Rhein-Münsterland-Express ) and the regional train line RB 48 ( Rhein-Wupper-Bahn ) over the section between Wuppertal Hbf and the Linden junction, from which they continue on the Gruiten – Köln-Deutz railway line .

The RE 4 ( Wupper-Express ) and RE 13 ( Maas-Wupper-Express ) regional express trains run the entire route . The section they use between the Haan-Gruiten junction and the Düsseldorf-Gerresheim train station is only single-track, the other sections are double-track.

The S-Bahn line S 8 also runs over its entire length , but on the completely double-track S-Bahn line on the same route. The S-Bahn tracks between Wuppertal Hbf and Wuppertal-Vohwinkel station are also used by trains on the S 9 S-Bahn, which then continue on the Wuppertal-Vohwinkel – Essen-Überruhr line. The S-Bahn line S 28, which is operated by Regiobahn GmbH and which branches off at the same level in the Düsseldorf-Gerresheim station to continue on the Wuppertal Northern Railway to Mettmann , also runs over the S-Bahn tracks in the Düsseldorf urban area . During rush hour between the train stations Wuppertal-Vohwinkel and Langenfeld (Rhineland) (section Vohwinkel - Düsseldorf Hbf only in load direction ), the S 68 and S 6 lines supplement the S 68 line.