This article covers the former city of Rheydt. For places and people with similar names see Rheidt (disambiguation) . 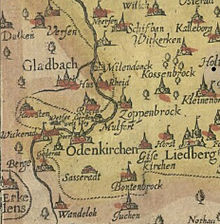 Rheydt (1620). First correct map of Rheydt (Rheid), which was mistakenly confused with Giesenkirchen in maps before 1620. Rheydt Castle (Hus Rheid) can also be found on the map.

Between 985 and 999 the dioceses of Cologne and Liège exchanged several parishes, including the parochiam Reithe . The origin of the name is uncertain, but is possibly derived from the Old High German riuti ( clearing ). The area on the Lower Rhine was originally Celtic settled in Roman times, is also a settlement proved. At that time the Germanic tribe of the Ubier had been settled here by the Romans .

Rheydt belonged to the Duchy of Jülich-Berg towards the end of the 14th century ; before that, the Margraves Walram von Jülich (1277–1297), Gerhard VII. Von Jülich (1297–1328) and Wilhelm VI ruled . von Jülich (1328–1356). In 1348 the Duchy of Berg came to Jülich. Thereafter, Rheydt developed into subordinate rule with its own administration.

The city ​​belonging to the Prussian Rhine province and the district of Gladbach ( titular city since 1827, final city ​​rights since 1856) became an independent city (Stadtkreis) in the Prussian administrative district of Düsseldorf , on the Niers , on April 1, 1907 . In 1919 the city housed a district court , an upper secondary school with a reform high school, a lyceum, a teacher training college, a trade and trade school for girls, as well as a textile, iron and paper industry and cable works.

On August 1, 1929, Rheydt was united with the independent city of Munich-Gladbach , the city of Odenkirchen (city rights since 1856) and the communities of Giesenkirchen and Schelsen to form the independent city of Gladbach-Rheydt , but already in 1933 at the instigation of the then Reich Propaganda Minister Joseph Goebbels , who came from Rheydt separated again. Thereafter, the Rheydt urban area included the places Rheydt, Odenkirchen, Giesenkirchen and Schelsen.

The heavily damaged inner city was rebuilt according to plans by the architect and architecture journalist Alfons Leitl . A particularly striking element of this rebuilding plan is the ridge development on the main road.

After the Second World War , the German Werkbund was re-established in Rheydt in 1947 . The event, organized by Hans Schwippert , ended with the Rheydter Manifesto .

On September 12, 1968, the population passed the 100,000 mark and Rheydt became a major city . But in 1974 the population fell below this threshold again. On January 1, 1975, Rheydt was finally incorporated into Mönchengladbach.

For the religions in Rheydt see the article Mönchengladbach (Religion) .

The following overview shows the number of inhabitants according to the respective territorial status. Until 1833, most are estimates, then to census results  (¹) or official updates of the respective statistical offices or the City Council itself. The data relate from 1843 to the local attendees population, from 1925 to the resident population and since 1987 the population in the Location of the main residence. Before 1843, the number of inhabitants was determined according to inconsistent survey methods.

During the time of the National Socialists , the Lord Mayor was appointed by the NSDAP . After the Second World War , the military government of the British Zone of Occupation Dr. Carl Marcus as the new Lord Mayor. From 1938, Marcus worked as secretary to the secret service officer Kurt Jahnke . After his time at Büro Jahnke, a private intelligence service that worked under the patronage of Rudolf Hess and was presumably involved in the preparations for his flight to Scotland in 1941, he later became a German-British double agent with the MI6 cover name Dictionary . In 1947 it was rumored that Marcus had discovered the Grenzlandring race track . After leaving office in 1948, he took on new tasks in the field of cultural policy. In 1946 she introduced the local constitution based on the British model; then there was a city ​​council elected by the people , whose members are known as city ​​councilors . The council initially elected the mayor from among its members as chairman and representative of the city, who was active on a voluntary basis. Furthermore, from 1946 the council elected a full-time senior city director as head of the city administration. This administrative structure existed until the municipal reorganization on January 1, 1975.

See also : Results of the local elections in Rheydt

Mayor (and Lord Mayor) of the city of Rheydt

Lord Mayor of the urban district / the independent city of Rheydt

From 1956 there was the vehicle distinguishing sign RY of the independent city of Rheydt. In the course of the regional reform in North Rhine-Westphalia, Rheydt was incorporated into the city of Mönchengladbach in 1975 and with the loss of its independence, it also lost its own license plate. A new introduction was last rejected in 2016.

In the core of the old town of Rheydt there are two train stations, Rheydt Hauptbahnhof and Rheydt Güterbahnhof. The latter, however, is only used to park freight trains, special trains for football games in Borussia Park and trains for the Wegberg-Wildenrath test center . Despite its incorporation into the city of Mönchengladbach in 1975, the main station was not renamed, so Mönchengladbach is the only city in Germany to have two main stations.

The public transport in Rheydt is apart mainly by buses from the railway mobile and active NEW done. Rheydt is a district of Mönchengladbach in the tariff area of ​​the Verkehrsverbund Rhein-Ruhr . In the past, local transport in the city was provided by the Rheydt tram (1881 to 1959) or the Rheydt trolleybus (1952 to 1973) from Stadtwerke Rheydt.

Since 2006 is Rheydt Castle , the summer music Schloss Rheydt listed. Musicians from the fields of classical, rock, pop, jazz, swing and beat perform over a period of one week. Local groups from Mönchengladbach as well as internationally known artists are represented. In 2011, Gilbert O'Sullivan made his only appearance there in North Rhine-Westphalia.

In Rheydt is within the Rheydter flower processions the Golden Flower of Rheydt awarded. The award is considered the oldest German environmental protection award.

Coat of arms of Rheydter SV

One of the well-known Rheydt clubs is Rheydter SV , also known as Spö . In 1950, the football team was promoted to the Oberliga West under the direction of player-coach Fritz Pliska , which was the top division at the time. After relegation in 1952, under coach Hennes Weisweiler in 1953, the direct resurgence followed, but one year later they descended again into the second division. In 1965 the 1st hockey team rose to the major league. Rheydter SV plays its games in the Jahnstadion . The men's hockey team played in the 2nd Bundesliga West in the indoor season 2008/09 and in the 2nd Bundesliga North in the 2008/09 field season.

Also in Rheydt is the Grenzlandstadion , where Borussia Mönchengladbach's U23 team plays their games. 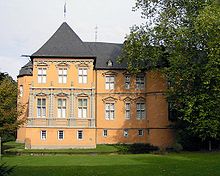 → Main article : List of personalities of the city of Mönchengladbach