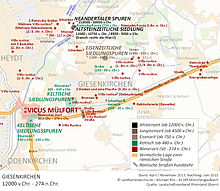 Between Mülfort, Haus Horst and Schloss Rheydt , an unusually large number of historical finds were made in the greater Mönchengladbach area. The fertile soil and the protection of the swampy Niers as well as the Hoppbruchs and the Trietbach made this location reasonably safe to live. The Neanderthals lived 118,000 years ago on the right bank of the Niers. Even Stone Age people lived from 14,000 v. In a settlement, for many thousands of years, not far from the Tackhütte, on the then eastern bank of the Niers.

The Celts lived until 50 BC. In numerous locations on the eastern bank of the Niers, in today's Giesenkirchen near Ahren and Ruckes and in neighboring Mülfort. The location there was chosen very aggressively and was clearly visible on a hill. The Celts were born in 50 BC. Murdered by Julius Caesar and his troops.

From 50 AD to 274 AD, a Roman village ( Vicus Mülfort ) existed just a few kilometers west of today's Giesenkirchen . Coming from there, an important road connection from the Maas to Neuss ( Novaesium ) crossed the Giesenkirchen area. The street was a little south of today's Mülforter Straße and from Schelsen in the area of ​​Liedberger Straße.

Some farms ( villa rustica ) were built on the Roman road . 15 rubble sites are in Giesenkirchen and another rubble site in the Baueshütte, Horster Schelsen and near Högden were discovered. In 274 AD all farms were destroyed by the invading Franks.

The place name Giesenkirchen is documented for the first time in 1150. This document, today in the historical archive of the city of Cologne , reports on a donation of the so-called “ tithe of newly cleared land”, which the provost of St. Gereon in Cologne makes the church of Giesenkirchen with the condition that small repairs on the roof in the future and upper part of the church and the sacristy are paid for by the parishioners. There is also a report from a choir bishop Walter, who at the same time held the pastoral position in Giesenkirchen. This donation was negotiated under the chairmanship of Archbishop Arnold of Cologne , in the presence and with the consent of the members of the Gereon Foundation in Cologne.

In the French era , the borders between the previous sovereigns were abolished.

On April 24, 1816, the new district of Gladbach was established . It belonged to the administrative district of Düsseldorf in the later Rhine province . The community of Schelsen belonged to the Gladbach district until its dissolution in 1929. The mayor's office of Schelsen as a whole municipality was divided into the special municipalities of Giesenkirchen and Schelsen. There was a local council for Giesenkirchen and Schelsen. There was a mayor's council for the entire community. Budgets were decided both for the special communities and for the entire community.

On July 29, 1929, the Prussian state parliament decided to reorganize the Rhenish-Westphalian industrial area. On August 1st of the same year the city of Gladbach-Rheydt was formed from the cities of Munich-Gladbach, Rheydt and Odenkirchen, as well as the communities of Schelsen and Hardt. On August 1, 1933, the young city was divided up again by order of the Imperial Court in Leipzig.

In the first elections after the Second World War, and in all subsequent elections, a decisive number of politicians from Giesenkirchen were elected to the city council of Rheydt .

In 1974 the North Rhine-Westphalian state parliament in Düsseldorf passed the law to reorganize the Mönchengladbach / Düsseldorf / Wuppertal area. An area change agreement was concluded between the cities of Mönchengladbach / Rheydt and the municipality of Wickrath. This contract also means that the new city of Mönchengladbach will be divided into ten city districts. In addition to the city council for the city as a whole, a district council was set up in each city district . The first district council for Giesenkirchen was elected in the local elections on May 4, 1975. In this district representation the CDU had 9 seats and the SPD 4 seats.

On October 22nd, 2009 the number of boroughs was reduced to four. The districts of the former Giesenkirchen district now belong to the Mönchengladbach Ost district.

The following overview shows the population of Giesenkirchen

In the election for the district representation in September 2004, the CDU received 43.3 percent (six seats), the SPD 25.4 percent (three seats), the FDP 4.7 percent (one seat), the Greens 8.3 percent (one Seat) and the FWG 16.1 percent (two seats) of the vote. For District Director Frank Boss (CDU) has been selected.

2009: Council members: Giesenkirchen-North: Horst-Peter Vennen (SPD), Giesenkirchen-South: Ralf Kremer (CDU). From 2004 to 2009 the CDU in Giesenkirchen lost a total of over 50 percent of its voters.

Hans-Willi Körfges (SPD) from Giesenkirchen has been a member of the state parliament of North Rhine-Westphalia since the state elections in 2000 .

The school history begins with a parish school, an institution of the Catholic Church. The time of this establishment is not recorded. It is documented that in 1571 the "schoolmaster uff Remigii" received 4 thalers from the Giesenkirchen church master. In 1809 the community built a school building with a classroom south of the church. When compulsory schooling was introduced in 1825, a second classroom had to be added.

On October 19, 1868, the Meerkamp school was inaugurated and opened for teaching. An extension was built in 1898. The Meerkamp school received its final form with the construction of a new wing with four classrooms, a teaching material room and a staff room in 1912. In 1846, citizens of Horster-Schelsen set up a private school for Protestant students from Schelsen. Costs were covered by voluntary contributions and an ongoing grant from the Gustav Adolf Association. Due to the low number of students, it was dissolved in 1945.

At the beginning of the 2012/2013 school year, the Catholic primary school Kleinenbroicher Strasse and the community primary school Friesenstrasse moved into the building of the former community secondary school Giesenkirchen on Asternweg. They were continued to a composite school under a school management.

The community secondary school moved to the newly built Asternweg building in 1968, but that did not cover the space required for this new type of school. The building was built for the Protestant elementary school. The secondary school had to accept class outsourcing in the building of the catholic elementary school Am Sternenfeld until 1974. Only then was the necessary school expansion on Asternweg completed. In 1974 the Rheydt City Council decided to set up a fourth grammar school. The school center Asternweg in Giesenkirchen then became the final location of this grammar school.

The grammar school has been named Franz-Meyers-Gymnasium since 1978 , after the former Prime Minister of North Rhine-Westphalia and honorary citizen of the city of Mönchengladbach, Dr. Franz Meyers . In the Giesenkirchen school center there is a pedagogical center with a school library, a gym with a teaching pool and a triple gym. There is also a municipal youth home in Giesenkirchen, the K5. It is for children and teenagers aged six and over.

The following buildings in Giesenkirchen are under monument protection .