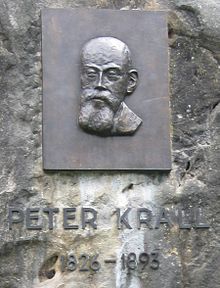 It takes its name from the Volksgarten in the Bungt district, a local recreation area through which the Bungtbach flows, with a pond, open-air swimming pool and old trees. This park is a gift from Peter Krall , who bequeathed his private property to the citizens of Mönchengladbach at the end of the 19th century.

The park pond could be used with rented rowing or pedal boats until 2018. A large playground near the pond is a magnet for young families. The park houses a concert shell.

The pond in the Volksgarten gained national fame in the fall of 2001 because a catfish should have devoured a dachshund puppy. There was only one eyewitness report, no photo, and the dog's owner was never found. Nevertheless, the fish made it as a summer loaf under the name "Killer Catfish Kuno" nationwide and even in the USA in the press reports. Several dozen anglers tried to catch the fish, but without success. Two years later, the story reappeared in the press because a 1.50 m long and 35 kg heavy catfish was found in the pond. Although there was no evidence of the incident with the dachshund, this catfish was stuffed and exhibited in the Rheydt Castle Museum.

Pictures from the Volksgarten