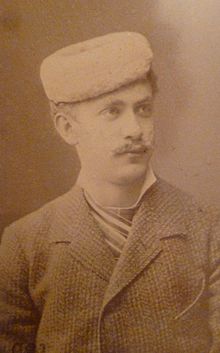 Karl Tettenborn as a corps student, around 1880

Karl Tettenborn studied law in Halle and Freiburg and was a member of the Corps Guestphalia (1878) and Hasso-Borussia (1879). In 1882 he became a trainee lawyer at the local court in Schkeuditz . In the autumn of 1883 he took a two-year vacation, which he spent mainly in England to study industrial and commercial relations. After his return he was assigned to the regional court in Halle (Saale) in autumn 1885. In 1887 he transferred to the general administration and became a government assessor with the government in Osnabrück , then with the Breslau district office . In February 1892 he became mayor of Homburg vor der Höhe , where he met the Geh. Building councilor Louis Jacobi tried to provide financial support for the Saalburg buildings . On the occasion of the laying of the foundation stone of the Saalburg Museum, he received the title of Lord Mayor from the Kaiser. On June 26, 1902, he was elected mayor of Rheydt . In 1905 he became Lord Mayor of Altona . At the presentation of the city of Altona in 1906 he became a member of the Prussian manor house . In 1909 he resigned his municipal offices and also left the manor.