Louis Jacobi (born April 21, 1836 in Homburg vor der Höhe ; † September 24, 1910 there ) was a German architect . His name is primarily associated with the reconstruction of the Roman Saalburg fort .

Jacobi, son of the Hesse-Homburg steward Heinrich Jacobi (1797-1854) and his wife Susanna, née Kessel (1812-1885), moved to the United States at the age of 15 and practiced his training there largely on his own initiative, in technical professions. In 1856 he returned to Germany and studied at the Karlsruhe Polytechnic before settling in his hometown as an independent architect in 1861.

He was also politically active; from 1886 to 1910 he belonged to the district council of the Obertaunuskreis , from 1886 to 1902 he was a member of the district committee. He was also a co-founder of the crafts school and from 1864 to 1891 a member of the Bad Homburg volunteer fire brigade , its honorary fire director and member of the church council of the Evangelical Lutheran congregation, member of a Frankfurt Masonic lodge , from 1868 lay judge and jury and co-founder of the history association. He was particularly interested in Roman architecture . The idea to rebuild the Saalburg fort goes back to him.

He is buried in the Evangelical Cemetery in Bad Homburg vor der Höhe . A bust of Louis Jacobi is in the Saalburg Museum. His manuscripts are kept in the Bad Homburg city archive.

His son Heinrich Jacobi continued his work as an architect and Roman provincial archaeologist.

Louis Jacobi created several public and sacred buildings as well as many private buildings in Bad Homburg and shaped the cityscape, so that it is exaggerated in the Zentralblatt der Bauverwaltung (October 22, 1910) that “there is hardly a house in Homburg that he has not built or at least rebuilt ". The most important buildings, as far as possible, here in chronological order; all in Bad Homburg, unless otherwise stated. 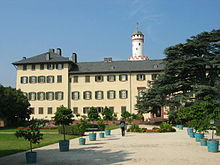 Landgrave castle with park and the castle tower 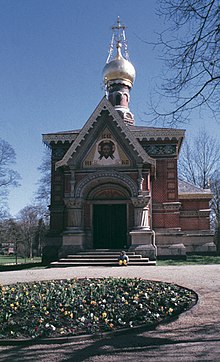 Russian chapel in the spa gardens of Bad Homburg

As part of the Reich Limes Commission , Louis Jacobi was route commissioner for the Limes section in the Taunus.

He also participated in several excavations in the Taunus as well as in Italy (1889 in Pompeii ). Some excavations, such as a Roman water pumping system in the area of Friedrichsdorf , were again secured by earth and have not been archaeologically examined again to this day.

His most significant building for posterity was the reconstruction of the Roman Limes Fort Saalburg on its Roman foundation walls. Excavation work began in 1853, and in 1870 the work was supported by the establishment of a Saalburg Museum. From 1894 the archaeological excavations of the fort on the Taunus Pass were carried out under Louis Jacobi, parallel to the exploration of the Limes by other scientists and lay people (Reichs-Limeskommission). The world's only reconstruction of a Roman fort took place from 1897 to 1907 on behalf of Kaiser Wilhelm II under Louis Jacobi. The inauguration of the Saalburg by the emperor was one of the most glamorous days in the history of Bad Homburg. Today it is the center of the Upper Germanic-Rhaetian Limes, recognized as a UNESCO World Heritage Site .

Jacobi's son Heinrich Jacobi was the second director of the Saalburg Museum and ran it for several decades.

The Saalburg also had a Roman-style tram stop, which was in the tram service until 1937, but has been used for beekeeping since the tram was shut down.