ALKIS is a redirect to this article. For further meanings, see Alkis . 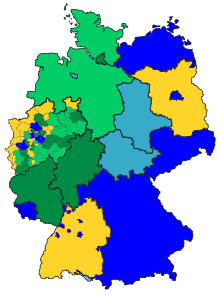 Status of the introduction of ALKIS (as of August 2015)

The data structure of ALKIS is essentially determined by the XML exchange format used , the standards-based exchange interface (NAS), which serves as the data interface for the AFIS-ALKIS-ATKIS model . NAS thus replaces the EDBS , BGRUND , SQD and DFK formats previously used for data exchange in the ALK . EDBS had a higher information density, but because of its coding it could not be interpreted by laypeople and was also not nationally standardized. The data storage in the state surveying authorities and the data transfer to their customers takes place after the changeover preferably in NAS format and in the ETRS89 / UTM coordinate system instead of in the Gauß-Krüger coordinate system as before . Upon request, the authorities provide their data, e.g. Some of them are also available in other formats and reference systems.

Since in the Federal Republic of Germany the surveying system and thus also the real estate cadastre is sovereignly organized at the level of the federal states , each federal state was responsible for the strategy and the schedule for the introduction of ALKIS. Various reasons led to several years of delays in the introduction, which was originally planned for 2007 nationwide.

The changeover of the coordinate systems from Gauß-Krüger to UTM did not take place at the same time, but was partially migrated separately: In Baden-Württemberg, the UTM changeover is not expected before the end of 2017 [obsolete] ; In Bavaria, the changeover will take place at the turn of the year 2018/2019 with a transition period of one year; in Brandenburg, ETRS89 / UTM were already introduced before ALKIS; Saarland is the only federal state that wants to remain in the GK reference system, but also wants to offer converted UTM coordinates.

Thus, all land surveying administrations have been offering ALKIS data since 2015 and the previous ALK with the data format EDBS has been replaced. Coordinate systems still partially deviating.

In the course of the changeover to ALKIS, the measurement and data storage of previously mandatory detailed objects, such as sidewalks and hard shoulders, which are no longer kept in official databases, was switched off due to cost-saving measures by most of the land surveying offices. On the other hand, the more precisely ascertainable data lead to a change in the database, which falsifies the statistical evaluations by other state offices (when compared with data from the previous system).