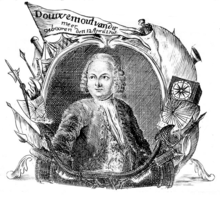 Douwe Jansz Mout van der Meer , actually Douwe Jansz Mout (born April 12, 1705 , † after 1758), was a Dutch showman. He became famous for his rhinoceros , which he exhibited in different countries in Europe; for his success as a showman he was ennobled.

Little is known about Douwe Mout's origins. Documented in the archives of the city of Leiden in Holland are a birth announcement from April 12, 1705, a resignation from the Dutch East India Company from 1741 and the baptism certificate of a daughter Elisabeth from December 5, 1751. Later sources were based primarily on the representations van der Meer's showman ticket and on contemporary reports. After that he came from a seafaring family and his father, like his grandfather and two maternal uncles, was a commander in merchant shipping. From 1736 Douwe Mout made a career as a captain on long voyages for the Dutch East India Company. In 1740 he was in command of the Knappenhof . For the years 1742 to 1744 he is recorded as captain of the Goidschalxoord , which sailed on the route between Holland, India and the Dutch East Indies . There is evidence of a rhinoceros named Clara that he brought with him to the Netherlands in 1741 from the Knappenhof in Bengal . Douwe Mout had bought the young animal from Jan Albert Sichterman , the director of the company in Bengal. From 1746 he successfully toured Europe with Clara. A daughter's baptismal certificate from 1751 names Elisabeth Snel as her mother; however, no marriage certificate has survived.

Encouraged by the success of Clara's first shows in front of a home audience, Douwe Mout founded a small show troupe , constructed a transport vehicle for the rhinoceros and traveled with it through Germany, Austria, Switzerland, France and Italy from 1746 to 1758. The tour ended with Clara's death in England and left an unprecedented hype about a rhinoceros.

For the first time since the early 16th century, when a specimen captured by Dürer in a famous woodcut landed in Lisbon, a rhinoceros could be seen again in Europe. Douwe Mout's displays of his Clara attracted all social classes to his ring , and even crowned heads did not miss them. The admission prices were staggered, both according to the quality of the seats and the social rank of the audience.

Douwe Mout also managed to inspire audience enthusiasm beyond the performances and turn it into money. He took care of illustrated posters and advertisements for the performances as well as the sale of copperplate engravings in various formats; Clara souvenirs, such as medals in silver , bronze or zinc and the urine of the rhinoceros, which was said to have healing properties, were sold everywhere.

Clara became a star. The artists painted them in oil , the engravers spread their likeness .

Emperor Franz I raised Douwe Mout to the nobility in 1746, from then on he called himself van der Meer . With Clara's death in 1758, however, the showman's track is lost; when and where Douwe Mout van der Meer died is unknown.