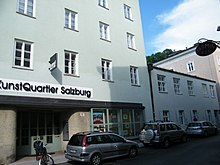 In 1713 (–1753) the house standing here at that time was called the Murersche and Eggedacher housing .

As the son of Christoph Egedacher, Egedacher belongs to the Straubing organ building dynasty of the Egedacher , who, together with the Butz and Freundt families, are considered to be the most important representatives of the southern German organ building school and thus of the Bavarian and (present-day) Austrian region.

At the age of about six he moved with his father from Munich to Salzburg, where he was enrolled as a pupil at the Benedictine grammar school on October 30, 1677. He probably received his training in his father's workshop in Salzburg- Mülln .

On June 25, 1703 he married Maria Forsthuber in the Muellner church , with whom he had eight children. Maria Anna was baptized on July 24, 1704 in Mülln, the other children in the old Andräskirche : Johann Christoph (October 22, 1706), Maria Eva (December 20, 1707), Johann Jakob (May 19, 1709), Johann Georg Kajetan (April 6, 1711), Maria Clara (April 8, 1713), Johann Rochus Egedacher (August 5, 1714) and Johann Simon Wolfgang (October 27, 1717). In his second marriage, Johann Christoph Egedacher was married to Maria Lanz. After the death of his father, Egedacher was awarded the position of the Salzburg court organ maker on August 6, 1706, with a monthly salary of 12  fl. 30 kr. During his lifetime, in 1703, on the occasion of the planned expansion of the Salzburg cathedral organ, he made his first study trip to Trento to the organ of the council church "Santa Maria Maggiore". On a second trip to Strasbourg in 1717 , he visited Andreas Silbermann , examined the organ he had built for the Strasbourg Cathedral with him , and bought his recipe for a preparation against "worm damage".

Egedacher first had his workshop in Salzburger Augustinergasse 2, at the corner of Mülleggstrasse 17, later in the house at Bergstrasse 12, which in 1713 was called the Murersche and Eggedacher houses . According to a so-called description of the soul , he had three journeymen in 1713: Wilhelm Stalls from Franconia , Anton Singstoller from Landshut and Joseph Dözer .

His two most important works are likely to be the expansion (1705/06) and fundamental improvement (1718) of the Salzburg cathedral organ and the new construction (1714–1716) of the large Liebfrauen organ in the Salem cathedral . In addition, more than 25 new organs can be verified by him.

Active as an organ builder until the end, he died at the age of 83 and was buried in 1747 at the St. Sebastian cemetery in Salzburg .

His daughter Maria Anna Egedacher, born on July 24th, 1704 in Mülln, was later ... a royal court singer [and] received [...] an exceptionally high monthly salary of 25 florins due to her excellent [!] Voice, which after her on April 17th 1730 marriage with the court tenorist Giuseppe Francesco Lolli from Bologna was reduced, but still 16 fl. Fraud .

One portrait shows Johann Christoph Egedacher with Johann Babtist Graf Thurn-Valsassina and Leopold Mozart . The picture was in the painting collection of Franz Laktanz Graf von Firmian at Schloss Leopoldskron until 1830 ; the depiction is considered lost.

The list includes some of his proven new builds.

The size of the instruments is indicated in the fifth column by the number of manuals and the number of sounding registers in the sixth column. A capital “P” stands for a separate pedal.