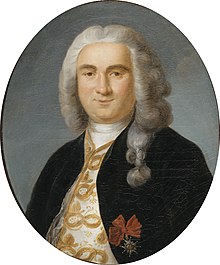 La Bourdonnais was a captain in the navy of the French East India Company as early as 1723 . In 1724 he distinguished himself with the capture of Mahé (India) on the Malabar coast and therefore received this name affix. From 1734 he was governor of the islands of Mauritius (then Île de France ) and Réunion (then Île de Bourbon ) and built them into flourishing colonies. In 1740 he was entrusted with the command of a naval department in the East Indian waters. From 1744 onwards, in the course of the conflict in the War of the Austrian Succession, the First Carnatic War with theBritish East India Company . La Bourdonnais inflicted significant damage on the English and forced Madras to surrender on September 21, 1746 . Since he was not supposed to make any conquests on the mainland, he left Madras again for a contribution of 9 million livres . Therefore he was accused by the Governor General Joseph François Dupleix of betraying the company's interest. Therefore, he returned to Paris in 1748 and was imprisoned in the Bastille . After three years in prison, he was declared innocent in 1752 and released, but he died a little later.

He left his memoirs (Paris 1750). His memory is immortalized in Paul et Virginie by Jacques-Henri Bernardin de Saint-Pierre ; In Port Louis , Mauritius, a statue was erected for him in 1859, which is now a listed building. The place Mahébourg , a district capital of Mauritius, as well as Mahé, the main island of the Seychelles group, was named after him.

His grandson was the famous chess player Louis-Charles Mahé de La Bourdonnais , who also published his grandfather's life story in 1827.