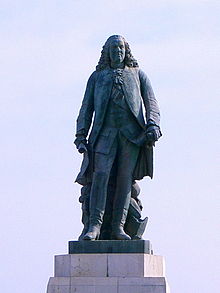 Meeting between Dupleix and Muzaffar Jang, the governor ( subahdar ) of the Deccan

Dupleix was born in Landrecies (northern France). His father, François Dupleix, was a wealthy farmer who wanted to raise him to be a merchant. To dissuade him from his passion for science, he sent him on a trip to India in 1715, on board one of the ships of the French East India Company . Dupleix made several trips to the American continents and more to India. In 1720 he was made a member of the Pondicherry Supreme Council . He showed great business acumen, and in addition to his official obligations he also did great private business. This made him a fortune. In 1730 he became superintendent (manager) of French interests in Chandernagore . The city prospered under his dynamic administration and gained great importance.

In 1741 he had married Jeanne Albert, the widow of one of the company's councilors. She was a woman of strong character and sharp mind who was called Joanna Begum by the Indians . She was of great use to her husband in negotiations with local rulers. She died in 1756. Two years later he remarried.

His reputation secured him in 1742 the appointment as governor general of all French branches in India. His ambition was now to win large areas in India for France. To this end, he established relationships with local princes and also adopted a splendid oriental style in clothing and furnishings. The British were concerned. But the threat to their settlements and influence was partly averted by the bitter jealousy that developed between the French Dupleix and La Bourdonnais , the governor of the 'Île Bourbon' (now La Réunion ).

From 1744 onwards, during the War of the Austrian Succession, the First Carnatic War broke out with the British East India Company . When the city of Madras surrendered to the French in 1746, Dupleix opposed the return of the city to the British. In doing so, he violated an agreement signed by La Bourdonnais. He sent an expedition against Fort St. David (1746), but it was defeated on the march by the Nabob of Arcot , an ally of the British. Dupleix managed to get the nabob on his side and tried again to take the fort, but to no avail. A midnight attack on Cuddalore was repulsed with great losses on the part of the French.

In 1748 Pondicherry was besieged by the British, but in the course of this undertaking the news of the peace treaty that had been concluded between the French and British in Aachen was brought. This ended the War of the Austrian Succession (1740–1748), in which the French and British fought in opposing alliances. Dupleix next entered negotiations aimed at the subjugation of South India and sent two large contingents of troops to assist two aspirants to the throne who were demanding the sovereignty of the Deccan and the Karnatak. The British supported the other side.

The conflicts between the French and the British in India continued until 1754. Then the French government, wanting peace, sent a special envoy to India with orders to depose Dupleix and, if necessary, to arrest him. These orders were carried out. What remained of Dupleix's diplomatic efforts was ruined in one fell swoop, and he himself was forced to return to France on October 12, 1754. He had used up his private fortune in the service of his public duties. The company refused to acknowledge his claims, and the government refused to aid a man whom it continued to regard as an ambitious and greedy adventurer. One of the most important French colonial governors died in oblivion and hardship on November 10, 1763.

Place Dupleix and the nearby Dupleix metro station were named after him. The French Navy has named a total of four of their ships after him: