The neutrality of this article or section is disputed. A reason can be found on the discussion page  in the " Neutrality " section. You can get more information here . 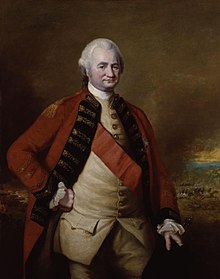 Clive in a portrait by Nathaniel Dance-Holland

Robert Clive, 1st Baron Clive (born September 29, 1725 in Styche , Shropshire , † November 22, 1774 in London ), called Clive of India , was a British general and statesman . He established the British position of power in India.

Robert Clive was born on the Styche family estate in the Moreton Say parish, Market Drayton , Shropshire. From his second speech to the British House of Commons in 1773 it can be seen that this estate only yielded 500 pounds a year and that his father was therefore forced to work as a lawyer.

The Clives or Clyves were one of the oldest Shropshire families to have owned the estate since the time of Henry II . A Clive was Irish Exchequer (Chancellor of the Exchequer) under Henry VIII. , Another member of the Long Parliament . Robert's father Richard sat in the House of Commons for Montgomeryshire for a long time . His mother, Rebecca Gaskell, to whom he was fondly attached and who had a great influence on his career, was a daughter and - together with her sister Sarah, Lady Sempill - heiress of Nathaniel Gaskell from Manchester.

Robert was the couple's oldest son. His five sisters, all of whom were married, remained closely connected throughout his life. The only brother, William (* 1745), died in 1825.

Robert Clive was considered a difficult student and was sent from school to school. Among other things, he also attended the renowned Merchant Taylors' School in Northwood, London, but often neglected his studies.

However, he cannot have been as uneducated as his early biographers claim, because he read Horace in his later life and in his youth must have laid the foundation for the clear and energetic style that characterizes all of his dispatches. William Pitt the Elder, Lord Chatham , declared one of Clive's addresses in Parliament to be the most eloquent speech he had ever heard.

The first years in India

At the age of 18 he appeared as a "writer" , i.e. H. as secretary, in the civil service of the East India Company to earn a living, and was sent to Madras , the most important British base in north Pondicherry . Since his ship had stayed in Brazil for nine months , he took the opportunity to learn Portuguese . As it turned out later, this was a skill that was of great use at a time when hardly any of the company's employees were bothering to learn the various languages ​​of India.

During the first two years of his sojourn in India, Clive suffered from the climate, severe homesickness, and restrictions imposed on the younger scribes of the East India Company. He was also constantly at odds with his colleagues; he even dueled with one. The first signs of depression appeared early on, from which he suffered all his life and under the influence of which he finally ended his life himself. One of his comrades later reported that Clive had pulled a pistol on his head twice without success. He never spoke about it himself later. Clive found solace during this difficult time in the governor's library, where he tried to make up for his missed schooling through systematic studies.

From 1744 the First Carnatic War with France broke out in the course of the conflict in the War of the Austrian Succession . Clive had just turned 21 and of legal age when Madras was forced to surrender to French Admiral La Bourdonnais in 1746 . During the occupation of the city by the French under Joseph François Dupleix , the French governor in India, Clive and others managed to break away to Fort St. David, about 20 km south . Dissatisfied with the current situation and tired of his purely commercial activity, Clive joined the East India Company as Ensign at the age of 21 . There he proved himself as a troop leader and pushed the French-Indian troops back, so that Madras became British again.

With the end of the Austrian War of Succession in 1748, the British-French First Carnatic War in India ended, so that Clive returned to the company's civil service. However, the clashes between the French and British companies continued, so that Clive returned to military service in 1750, due to his previous services as captain and steward of the company's troops. In 1751 the Second Carnatic War broke out , in which Clive and his British-Indian troops conquered Arcot and repelled the siege that followed. He continued the campaign with further victories, which contributed to the end of French rule in southern India.

The booty money won from the victories was distributed so that Clive became a wealthy man and married a sister of the royal astronomer and mathematician Nevil Maskelyne . However, his health had suffered so much that he returned to England with his wife as a general in 1753. There he was elected to the House of Commons in 1754 , but immediately lost the seat due to party intrigue.

In the forty years after the death of the Mughal emperor Aurangzeb in 1707, the gigantic empire on the Indian subcontinent had gradually disintegrated and power had fallen into the hands of its viceroys or subadhars . The three most powerful among them were the Nizam of Dekkan (south and central India), who ruled from Haiderabad , the Nawab of Bengal , whose capital was Murshidabad , and the Nawab or vizier of Awadh in Lucknow .

The French governor Dupleix, who was an able administrator but not a soldier, took advantage of these unstable conditions and the striving for power of the Indian princes to expand his own sphere of power at the expense of the British. As a result of the inability of the local representatives of the British company, the situation became so threatening that Clive was called for help and was sent again to India in 1755. There he immediately took countermeasures, gathered troops and captured the pirate fortress of Gheria . In the Battle of Plassey in 1757 he led the forces of the British East India Company to victory over those of Siraj-ud-Daula , the last independent nawab of Bengal. The Battle of Plassey is seen as the beginning of British rule in India, making possible the recovery of Calcutta and the conquest and permanent occupation of Bengal. Clive was also able to repel an attack by the Dutch East India Company .

In 1760 Clive returned to England and was taken over by King George III. receive. He acquired lands in the Irish counties of Limerick and Clare and was raised on March 15, 1762 in the Peerage of Ireland to Baron Clive , of Plassey in the County of Clare. In 1761 he was elected as a member of the British House of Commons . In 1764 he was made Knight Companion of the Order of the Bath .

Third visit to India: reform and consolidation of British rule 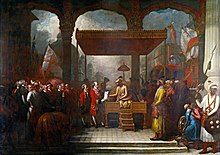 The Emperor of the Indian Mughal Empire Shah Alam II , son of the late Emperor Alamgir II , presents the Treaty of Allahabad to Clive, the representative of the East India Company, as a result of the Battle of Buxar on October 22, 1764. It marks the beginning of British rule in India.

The administration of the British East India Company in India finally fell through mismanagement and corruption. Clive was then appointed governor and commander in chief of the British possessions in Bengal, but was elected to one of the directors of the East India Company before his departure. In May 1765 he traveled to Calcutta and carried out radical reforms of the civil service of the East India Company by 1766. In particular, he enforced a strict ban on accepting gifts for all employees and at the same time ensured that the employees were adequately paid.

Because of his poor health, Clive finally returned to his homeland at the end of January 1767. In 1772 a parliamentary inquiry into the activities of the East India Company was initiated, but Clive did not condemn it. Clive owned considerable estates, including the giant turtle Adwaita .

Clive, who had become an opium addict in the last years of his life , died of suicide on November 22, 1774.

A room at Powis Castle , the residence of Clive's son Edward, now serves as the Clive Museum. It features an exhibition of artifacts captured from Robert Clive during his campaigns in India; these include Indian swords, jewels and paintings as well as a reconstruction of the interior of a sultan's tent.

In 1935 the film Battle for India was released, in which Clive is played by Ronald Colman . The story takes place at the time of the Third Carnatic War.