Limerick ( Irish : Luimneach ) is a county ( county ) in the southwest of the Republic of Ireland .

Limerick is bounded to the north by the River Shannon and its estuary mouth. The largest watercourses, which all flow into the Shannon, are named Mulkear , Loobagh , Maigue , Deel and Feale .

Extensive plains of sandstone ridges, in some places also of volcanic rock ( trachyte and basalt ) , stretches around the county capital Limerick . In the west there are plateaus made of limestone and sandstone with peat bogs and heaths, the east and south-east are characterized by mountainous lands: Slievefelim , Galtee Mountains , Ballyhoura Mountains . 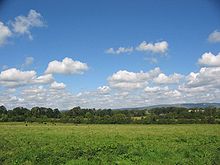 It is believed that the first Neolithic people in what is now the county were around 4000 BC. In the area around Lough Gur . Remains of the megalithic culture from Duntryleague date to 3500 BC. BC back. At the time of the Celts from 400 BC In BC the country was divided into insignificant small kingdoms (also called tuath ).

Christianity spread to the Limerick area in the 5th century. Some monasteries were founded such as Ardpatrick , Mungret and Kileedy . The Ardagh Silver Chalice dates from this golden age of handicrafts (5th to 9th centuries) . It is a masterpiece of metalworking, believed to date from the 8th century, and was found in Westlimerick in 1868.

The Vikings founded the city of Limerick in 812 on an island in the Shannon which is now called Kings Island, from which they drove Brian Boru before the turn of the millennium. When Donal Mór O'Brien, King of Munster , died in 1194 , the Anglo-Normans took control of Limerick. County Limerick was officially established in 1210. Over time, the Norman invaders became more and more assimilated and eventually became more Irish than the Irish. The Tudors wanted to curtail the power of these Gaelicized Norman rulers and bring all power into the hands of the central authority. English colonists were established in the county for this purpose. In 1569, Limerick's leading Norman family, the Geraldines , revolted against English rule. This led to a brutal war in Munster known as the Desmond Rebellion . The province was ravaged and the family's extensive estates were confiscated.

The next century brought further destruction. For most of the Irish revolt from 1641 to 1653, Limerick was behind the front line. During Cromwell's campaign through Ireland, however, it became a theater of war. In 1650/51 the city of Limerick was besieged by Cromwell's New Model Army, led by Henry Ireton. In October 1651, the city finally had to surrender.

During the Williams III war . against the Jacobites (1689-1691) the city was besieged again in 1690/1691. The overwhelming majority of the population supported James II. Under the leadership of General Patrick Sarsfield, 1st Earl of Lucan , the Catholic troops withstood the superiority of the opposing forces for almost two years. In October 1691, however, Sarsfield had to capitulate. But he managed to negotiate a treaty ( Treaty of Limerick ) that would have given the Catholics some rights. The provisions of the treaty were never implemented by the English. Hence the nickname Limerick's City of Broken Contracts .

In the 18th and 19th centuries there was a long period of persecution against the Catholic majority. Many lived in great poverty. The Great Famine in the 1840s led to mass emigration and a large- scale withdrawal of the Irish language. This began to change at the beginning of the 20th century. Some changes to the law by the British government made it easier for tenants to purchase land and thus avoid paying high rent payments to absent landowners.

During the War of Independence from 1919 to 1921 there was a lot of fighting, especially in the east of the county. The civil war that followed brought bitter clashes between the army of the new Free State and the treaty opponents of the IRA , particularly in the city of Limerick. But the consequences of these struggles were soon overcome. In recent years, County Limerick has benefited from the country's economic boom.

In agriculture, cattle and dairy farming play the greatest role.
The computer manufacturer Dell has its largest European production site in Limerick (2006).

The plot of the Pulitzer Prize- winning book Angela's Ashes by Frank McCourt is set in Limerick and describes life at the time.

Counties of the Republic of Ireland