He was the first son of the organist Georg Gebel the Elder. Ä. (1685-1750). The musical talent of the young Gebel showed very early. At the age of 6 he is said to have been heard with great admiration in front of the “most distinguished people” in Wroclaw . He was initially taught school knowledge at home. Then the father made sure that he received a comprehensive education at the Maria Magdalena high school .

The encounter with the Italian opera , whose performances he attended in Breslau, was formative for Gebel . At the age of 20 he worked as an organist at the parish church of St. Maria Magdalena, and he was a regular guest at the chapel of Duke Karl Friedrich von Württemberg-Oels . In the course of these activities, the first larger own compositions are likely to have been created.

At the age of 26 Gebel was accepted into the Dresden private chapel of Count Heinrich von Brühl , which was led by the later Thomaskantor Johann Gottlob Harrer . Gebel was a harpsichordist there and, in alternation with Harrer, was also responsible for creating the festival and house music. As a member of the Brühl private band, Gebels traveled to Warsaw in 1739, where musicians from the Dresden court repeatedly made guest appearances. 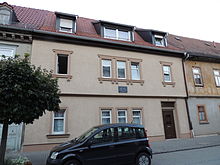 After twelve years of residence in Dresden Gebel went along with his wife Maria Susanna, the daughter of the Berlin painter Gebel, according Rudolstadt , where he received new tasks and demanded in particular as a composer and where he was highly respected. Another reason for moving to Rudolstadt was the planned closure of the Brühl Chapel. On August 29, 1746, Gebel was appointed "Concert Master" in the Rudolstadt Residence, and from March 20, 1750 he was allowed to use the title of "Capell Master". The productivity he sparked at the Rudolstädter Hof was immense and of such a kind that, as Peter Gülke put it, it would also be inconceivable “without the guarantee of solidity”. In addition to the almost completely preserved church cantatas from 1748 and 1751 as well as two passion pieces, no less than twelve operas, more than 100 symphonies and partitas as well as other harpsichord concerts are said to have been composed.

His works, of which almost exclusively the cantatas and oratorios have been preserved, are now kept in the Thuringian State Archives in Rudolstadt ( Heidecksburg Castle ) (music collection Hofkapelle Rudolstadt, HKR).