Mittelstrasse in the Dutch Quarter

The Dutch Quarter is a district in the center of Potsdam , which was built between 1733 and 1742 as part of the second city expansion under the direction of the Dutch master builder Jan Bouman from Amsterdam . The neighborhood consists of 134 brick homes, by the Central and Benkertstraße into four squares are divided. Under Friedrich Wilhelm I , known as the "Soldier King", the district was planned and the two western squares built. After his death in 1740, his son and successor Friedrich II had the quarter with the two eastern squares completed largely according to his father's plans.

Before the houses were built, the swampy ground of the Dutch Quarter was drained. For this purpose, a basin was dug to drain and collect the water before it was passed on to the Holy Lake . The design of the basin gave its name to the basin square south of the district , where the Catholic Church of St. Peter and Paul is now located. A pile grid has been established with countless tree trunks on the building land in the Dutch Quarter . The foundation placed on top consists of stones, which are Rüdersdorfer limestone . The blocks are approximately 1.30 meters high and 1.25 meters wide. In addition, it was necessary to fill the area with earth by one meter. Pumping stations kept the groundwater level low during the work . 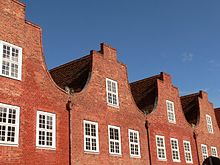 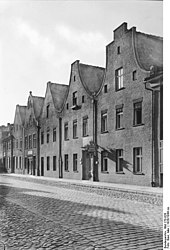 The neighborhood before World War II

Friedrich Wilhelm I's fondness for Dutch culture (with which the Brandenburg-Prussian Hohenzollerns were repeatedly confronted due to their relatives with the House of Orange-Nassau) had already led him as Crown Prince in 1704/05 on an educational trip to Amsterdam and The Hague. Since then, the Dutch model has remained an important benchmark for his ideas of an economically progressive state and functional architecture. All of the churches that Friedrich Wilhelm I had built in Potsdam have Dutch influences, but without following specific models. The Stern Hunting Lodge , the only building that the thrifty king had built for himself during his reign (probably by Dutch builders), is a hunting lodge in the style of simple Dutch town houses.

The Dutch Quarter is an expression of the “soldier king's” preference for the country on the North Sea and for the desire to benefit from the technical know-how of its residents. Part of Amsterdam's Noordse Bos district and eclectic Dutch styles of the 17th and 18th centuries. inspired self-contained quarters were intended to attract Dutch craftsmen to Potsdam in the 18th century. Since these did not come in the desired number, French and Prussian sales representatives, artists and soldiers moved into the type houses.

The Quarter of the Silk Weavers or Little Dutch Quarter

Under the successor of the "Soldier King", Frederick II , the Dutch Quarter experienced two additions along the Bassinplatz, which, however, are not part of the Dutch Quarter. First, around 1750–1752, three more Dutch houses were built next to the French Church and used by Dutch silk weavers. The buildings were demolished in 1988 in favor of a helicopter landing pad for today's Bergmann Clinic . These silk weaver houses on the east side of the Bassinplatz were rebuilt between 2014 and 2016. Most recently, from 1773 to 1790, under the direction of Carl von Gontard, the west side of Bassinplatz was built on, today's street Am Bassin and a few houses around the corner in Charlottenstrasse and Gutenbergstrasse. The Gontard houses remain true to the Dutch tradition, but are more richly decorated than those of the first construction phase. The three square fronts with 21 houses have been well renovated.

Until 1878, the 2nd  Battalion of the 1st Guard Regiment was on foot here in civil quarters . In 1906, at Mittelstrasse 3, from Bertold Remlinger's second-hand goods dealer, Captain von Köpenick bought a uniform of the same Guards regiment on foot .

After the Dutch Quarter was partially dilapidated during the GDR era, it was rediscovered after reunification , gradually restored - also with the support of the Dutch royal family - and has now been practically completely renovated.

There are three groups of house types in the Dutch Quarter: 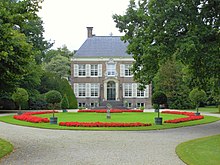 Vreedenhoff house from 1750 in Utrecht as a model

The facade structure of the eaves houses is most representative of the single eaves houses. These are most clearly influenced by Dutch. The model is a type of house that is represented in the Republic of the Seven United Provinces, for example by the Vreedenhoff house in Nieuwersluis near Utrecht . Both the single eaves houses in the Dutch Quarter and the Vreedenhoff house are two-story buildings with five axes and the entrance in the middle. The entrances are clad with the wooden baroque portal decorations typical of the Netherlands, the upper edges of which reach the main cornice. The main cornices are also made of wood and painted white. The facades are structured by slightly protruding corner pilasters and two pilaster strips flanking the central axis, which frame the portal decorations.

The gabled houses in the Dutch Quarter were originally referred to as "half houses". Like the eaves houses, they are 2-story, but laid out on three axes with an entrance and two window axes and have about half the living space of the five-axis eaves houses.

Other elements that can be traced back to northern Dutch craftsmanship that can be observed in all three types of houses in the Dutch Quarter are the white-painted, square-glazed windows with the wide white wooden frames and the green half-shutters, the so-called wind shutters. A characteristic of Dutch house entrances is that the skylight with small, square glazing is flush with the outside of the wooden frame, which is also mandatory here, while the door leaf is hinged on the inside of the frame.

Round gabled house in the Dutch Quarter

In the Dutch quarter there were originally only two different gable forms on the gabled houses, just like there were two types of eaves houses. A similar conformity can not be found in the streetscape of the republic in the 18th century. Those who built in progressive Holland did so according to their personal taste and ability. The result was a highly differentiated and individualized street scene with some of the most splendidly decorated gables, which were supposed to document the wealth of the house owner. In contrast, the uniformity of the facades in the Dutch Quarter rather reflects the personal taste of Friedrich Wilhelm I and his desire for a functional and above all economical construction method. What emerged over a long period of time in the republic and was an expression of an individual way of life was practiced in Potsdam in a Prussian way. The gabled houses in the Dutch Quarter are more like Dutch warehouses ( pakhuizen ) or in particular the hofjes , i.e. old people's homes.

The monument conservator Friedrich Mielke on the Dutch Quarter:

“Still, the Dutch Quarter is more than an imperfect imitation. It is the built expression for the close spiritual relations between Holland and Brandenburg. The personal ties between the two ruling houses may have played an important mediating role, but more decisive was the higher economic, technical and cultural level of the Netherlands, from which Brandenburg could and wanted to benefit a lot. "

The mixture of living space, small shops, galleries, workshops, pubs, restaurants and cafes give the Dutch Quarter a flair that makes it popular with residents and tourists alike.

Every year in September the pottery market takes place in the quarter and in December the Dutch Christmas market ( Sinterklaas ). On neighboring Bassinplatz every year in April, the Tulip Festival instead, which also goes back to the Dutch tradition of the neighborhood.

In 1777 Carl von Gontard , one of the most important architects of Frederick the Great , moved into the house at Benkertstrasse 16.

The quarter served as the backdrop for the city of Amsterdam during the filming of the fifth season of Homeland and is a regular location for the series jerks. by and with Christian Ulmen .