Schematic map of the Indo-Bangladeshi enclaves
(north is on the left, east is up)

As the only one of the Indian-Bangladeshi enclaves, Dahagram-Angarpota is still cut off from the Bangladeshi motherland, but can be reached via the Tin Bigha Corridor .

There was also an enclave within an enclave within an enclave (sub-sub-enclave) in this complex. This Indian exclave was the only third order exclave in the world. It consisted of a jute field with the name "Dahala Khagrabari" (first of 51) and lay in the Bangladeshi sub-enclave Upanchowki Bhajni, which in turn was in the Indian enclave Balapara Khagrabari, which is on the border of the Bangladeshi sub-districts ( Upazilas ) Debiganj and Domar located ( Fig. ). 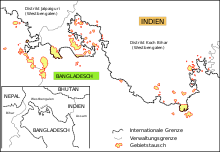 Territorial exchanges in the 2015 border treaty

Most of the enclaves were in the Koch Bihar district in the Indian state of West Bengal, which had been the autonomous princely state of Cooch Behar until India's independence . The Jalpaiguri district in West Bengal also had a number of enclaves and exclaves. On the Bangladesh side, this applied to the Panchagarh , Nilphamari , Lalmonirhat and Kurigram districts , which are in the Rajshahi and Rangpur divisions . The easternmost Bangladeshi exclave bordered on one side with the Assamese district of Dhubri .

The estimated population of the enclaves was around 70,000, although the estimates diverge widely. It is not possible to give an exact figure as the statistical authorities were practically unable to enter the areas.

The largest towns in and around the area are, from east to west, Dhubri , Kurigram , Koch Bihar , Dinhata , Lalmonirhat , Rangpur , Dhupguri , Nilphamari , Domar , Mainaguri , Haldibari , Jalpaiguri and Panchagarh .

Almost the entire population consists of Bengali- speaking Bengali . There is a huge difference in religion. While mainly Hindus live in the Indian part, there are Muslims in Bangladesh. Another difference is the standard of living, which is on average higher on the Indian side than on the Bangladeshi side.

American army map from the 1960s showing part of the western enclave complex around Chilahati.

From 1765 the influence of the British East India Company on the Mughal Empire increased, but the princely state of Cooch Behar remained sovereign. As a result, the enclaves and exclaves began to play a role as free places for offenders.

In 1947 British India was divided into India and Pakistan , which bordered Cooch Behar with East Pakistan . In 1949 Cooch Behar was added as a province of India and in 1950 it became a district in the state of West Bengal. Almost all enclaves between the various Indian administrative areas were rehabilitated in the following years.

In 1958 the first negotiations began to resolve the situation around the enclaves. However, this only led to few results and some plans met with resistance from part of the local population.

East Pakistan became the independent state of Bangladesh in 1971. In 1974 the governments of India and Bangladesh agreed to swap the areas of the enclaves and / or to simplify access to the mutual enclaves. The treaty for this was signed by Bangladesh, but still had to be ratified by India. In 2001, the countries continued to discuss the problem. The Indian-Bangladeshi Border Treaty was only ratified by the Indian Parliament in 2015, and the border treaty finally came into force on August 1, 2015.

Since the partition of British India and the resulting tensions between the states, the situation in the enclaves has been complicated, as in almost all cases one country prevented the other from ruling its enclaves and exercising its authority there.

Although numerous attempts were made to facilitate access to the enclaves - for example to create a corridor, to introduce regulations for the delivery of goods and the entry and exit of enclave residents - the situation in the enclaves had only deteriorated over the years. In most of the inhabited exclaves there was neither electricity nor fresh drinking water, as the two countries did not allow pipes to be laid across the other's territory. Most of the enclaves were also economically cut off from their motherland. Therefore they were dependent on illegal border crossings, deliveries by third parties or had to take care of themselves completely. But there was the possibility for the residents to get permission to leave their enclave. To do this, however, they had to have a visa, which they had to collect from the consulate of the country in which the enclave was located. The only way to get to the consulate was to cross the border or borders illegally, which was not safe. In addition, these obstacles created an acute shortage of medicines and there were no schools.

In particular, residents of the Indian enclaves have moved to India over the years because the situation has become intolerable. Their place was taken by poor Bengali from Bangladesh, who thereby stayed illegally on Indian territory. But this had little consequence, because the area was de facto no man's land, which did not mean, however, that Bangladesh took care of these captured enclaves. The enclaves on both sides were also breeding grounds for smugglers and other criminals.

The situation varied from enclave to enclave. The residents of some enclaves were allowed to shop at the local market and send their children to school there. The largest Bangladeshi exclave, Dahagram-Angarpota, was also connected to the motherland with funds from the Tin Bigha Corridor since 1999 . However, this did not apply to public utilities , which made a hospital there unusable because it had no electricity.