The Court is in Austria an independent organ of the National Council . It is responsible for auditing the financial management - i.e. the financially effective activity - of the federal government , the states and the municipalities with more than 10,000 inhabitants. Also enterprises , foundations , funds under public law and entities to which the public is at least a 50% stake, are obliged to stand on its request the audit.

The audit office determines the subjects, dates and intensity of the audit itself. It can, however , be requested by the National Council or a state parliament at any time to carry out a specific audit.

In addition to the (Federal) Audit Office, the nine federal states of Austria have each created their own control body in their respective state constitutions, which in Vienna is called the City Audit Office (formerly the Control Office) and in other countries the State Audit Office.

According to the statutes of the International Organization of Supreme Audit Institutions, the President of the Court of Auditors is automatically its Secretary General.

The current President of the Court of Auditors is Margit Kraker . This was elected by the National Council on June 16, 2016 at the suggestion of the SPÖ and ÖVP .

The first forerunner, the general treasury , was established by Maximilian I in 1496 .

In 1761 Maria Theresia created a Hof-Rechen-Cammer , which was renamed Supreme State Control for a few years in 1794 . There was a decades-long tug-of-war over the powers and tasks of the institution between those who advocated cross-departmental controls and those who preferred to avoid more control.

On November 21, 1866, Franz Joseph I founded the Supreme Audit Office by imperial decree , which was directly subordinate to the emperor and whose head had ministerial rank. He started his activity on January 1st, 1867 and was not responsible for the countries of the Hungarian crown (Hungary, Croatia, Transylvania).

In addition, after the settlement with Hungary in 1867, the Joint Supreme Audit Office was set up for the jointly financed affairs of both parts of Austria-Hungary . (It became obsolete when Hungary left the Real Union with Austria on October 31, 1918.)

In November 1918 the Supreme Audit Office was subordinated to the German-Austrian State Council . On February 6, 1919, the State Audit Office, subordinate to Parliament, was established by law , and since November 10, 1920 (when the Federal Constitution came into force ), the Audit Office of the Republic of Austria . It did not exist from 1938 to 1945. The first president after the Second World War was Leopold Petznek . 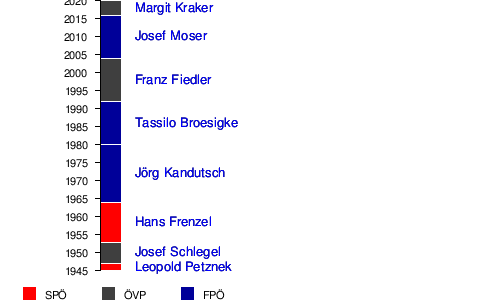 President of the Austrian Court of Auditors