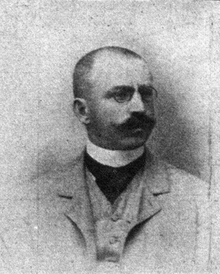 Josef Schlegel (born December 29, 1869 in Schönlinde , Bohemia, † April 27, 1955 in Linz ) was an Austrian politician of the Christian Social Party . He held public offices on the one hand in Vienna as a member of parliament during the Austro-Hungarian monarchy as well as during the transition phase to the First Republic and on the other hand in Upper Austria as a member of the state ob der Enns and as a member of the government, governor and president of the state parliament in Upper Austria up to the February fighting 1934 .

Josef Schlegel visited in Litomerice , the school where he graduated in 1888 and then studied in Vienna Law (PhD 1893). Schlegel became a member of the KAV Norica Vienna in 1888 and was a member of the KÖHV Carolina Graz . During his student days he was involved in the events of the oyster battle .

After completing his studies, he initially held positions at various courts, including from 1902 to 1909 at the district court in Perg , and finally became head of the court in Linz.

From 1903 he was also a member of the Upper Austrian state parliament . After the First World War , he held the position of finance advisor to the provincial government and was deputy governor of Upper Austria .

On February 23, 1927 Schlegel was elected Governor of Upper Austria and, in accordance with the tradition practiced up to that point, was also President of the State Parliament .

The rise of the Heimwehr under Ernst Rüdiger Starhemberg fell during his term of office . The conflicts with the Heimwehr led to his resignation as governor and retirement from politics on February 17, 1934, as Schlegel was part of the democratic wing of the Christian Socialists.

After the Second World War , Schlegel was appointed President of the Court of Auditors on February 23, 1947 , which he headed until June 2, 1953.

In Perg, Schlegelstrasse was named in 1985 because of his seven years of activity at the local district court, and in Linz in 2012, Josef-Schlegel-Strasse was named.

President of the Austrian Court of Auditors