Krásná Lípa (German Schönlinde ) is a town with about 3500 inhabitants in the Okres Děčín in the Czech Republic .

The city is located in northern Bohemia on the upper reaches of the Kirnitzsch between the Elbe Sandstone Mountains and the Lusatian Mountains at an altitude of 450 m west of Varnsdorf and 6 km southwest of Rumburk on an old trade route from Upper Lusatia to Tetschen an der Elbe . To the north is the Bohemian Netherlands . The railway line from Prague to Georgswalde / Ebersbach (formerly the Bohemian Northern Railway ) has been running through the town since 1869, and today it mainly serves regional traffic between Rumburk and Děčín .

The municipality is divided into the cadastral districts of Krásná Lípa, Krásný Buk, Kyjov u Krásné Lípy, Vlčí Hora and Zahrady. 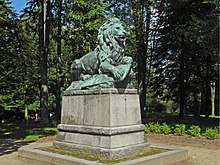 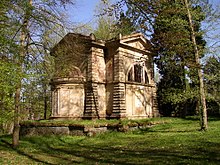 Schönlinde was built not far from the Krásný Buk (Schönbüchel) castle , which was destroyed in 1339. In a stone under the altar of the old church there was a stone with the date 1144 carved into it, which suggests that there was a church here as early as the 12th century. Schönlinde is first mentioned in a document in 1361. At that time the place was one of the few parish villages in the area of ​​the Tollenstein rulership , to which Schönlinde belonged until 1573. The place came to the rule of Kamnitz through purchase .

Linen weaving has been developing in the village since the 17th century . A yarn factory was established in 1731, and in the same year Schönlinde received from Emperor Karl VI. granted the market right. In 1754 the beautiful parish church of St. Magdalena was built, which is decorated with sculptures by the Dresden court sculptor Pettrich . In the late 19th century, the place into an important center of developed textile industry in northern Bohemia, the 1870 the city rights were granted.

From 1885 Schönlinde was the seat of the mountain association for northernmost Bohemia under the direction of Dr. Johann Hille.

After the First World War , the region was added to the newly created Czechoslovakia .

After the Munich Agreement Schönlinde belonged from 1938 to 1945 for the district of Rumburk , Region of Usti nad Labem , in the Reich District of Sudetenland the German Reich .

Then there were the influx of Czechs from the interior, Slovaks , so-called repatriants and Roma .

Today a large group of Roma lives in Krásná Lípa , the proportion of which is growing compared to the rest of the population.

Until 1945 Schönlinde was mostly populated by German Bohemia , most of which were expelled.

Former Headquarters of the company Hielle & Dittrich in Krásná Lípa

Former Headquarters of the company Hielle & Wünsche in Krásná Lípa

Since the middle of the 19th century and after the railway connection in 1868, a number of textile factories were built in Schönlinde that no longer exist today:

The company Hielle & Dittrich was founded by Carl Dittrich (1819–1886) and Karl Theodor Hielle (1822–1871) in 1849 as a yarn trading company in Schönlinde with a branch in Mährisch Schönberg . From 1857 to around 1920 the "Zyrardower Manufacturen Hielle & Dittrich" in Żyrardów also belonged to the company. All of Hielle & Dittrich's possessions in Bohemia, Moravia, Austria, Italy and Germany were administered from Schönlinde until 1945. The plants in Czechoslovakia were expropriated in 1945 and continued as the state-owned ELITE Varnsdorf company.

The Hielle & Wünsche company was founded in Schönbüchel in 1851 by Eduard Hielle (1824–1884) and Josef Wünsche. At the Fiebigteich (Cimrák) in Schönlinde they set up a mechanical weaving mill in 1873, and in 1896 they expanded their company to include the Anton Friedrich spinning mill in Prager Straße in Schönlinde and a branch in Rumburg. The company was later led by engineer Paul Hielle (1878–1942). After 1945 it was nationalized and the company became part of the ELITE company in Varnsdorf.

The stocking factory was founded in 1854 by Stefan Schindler (1831–1887), after his death it was continued by his son Adolf Schindler (1857–1893) and son-in-law Joseph Franz Palme. Modern factory buildings in the style of functionalism ( Bauhaus style ) were built on Kyjovska and Stradal streets, which are now used by the Novia Fashion sro company. The factory owner's villa, called Palme-Villa, was built by the architect Hans Richter . The company later traded under the name Strumpffabrik Joseph Franz Palme with its headquarters in Schönlinde and manufacturing in Turn (Trnovany). After nationalization, the company belonged to ELITE Varnsdorf, and in 1949 it became part of the newly founded state-owned company EVA.

Gustav Adolf Jäger (1851–1927) founded the Gustav Jäger company in 1877 to produce hosiery on hand knitting machines. Since 1892, it also had a branch in Ebersbach, Saxony . In 1893 a new factory was built in Schönbüchel with a steam power plant and modern cotton machines . In 1906 he founded the association of knitted and hosiery industrialists in Schönlinde and the surrounding area and was its president. In 1908 the company employed 300 knitters and 400 home workers, processed 140 tons of cotton, wool, silk and crepe (pile) annually and was one of the most important in the branch in Austria-Hungary. In 1918 there were branches in Budapest , Bucharest , Lviv , Paris , Prague , Trieste , Warsaw and Vienna . His son Gustav Adolf Jäger jr. (1878–1954) took over the company after the death of his father in 1927 and became its director. The company existed as a general partnership until 1945 . After the Second World War, the family was expelled and the company was nationalized. Production in the nationalized company was stopped in 1947 and the machines were dismantled. The building then served as a silo for the agricultural products and was demolished in 2001. The nearby factory owner's villa, which was built by Gustav Jäger, has been preserved to this day.

In 1882 Joseph Heinrich Vatter founded a cotton knitting factory for hosiery in today's Nerudova Street 680/3. After his death in 1940 the company went to Adolfine Zimmer, b. Vatter, and several minor heirs, including Alfred Vatter and Heinrich Alexander Vatter. In July 1945 it was expropriated by the national administration. Although the company had modern technical equipment and produced an average of 25,000 pairs of stockings a month, it was liquidated. The factory halls then served as a warehouse for the Motokov foreign trade company. The grandson of the founder Fred Vatter founded in 1946 in Schongau the Vatter GmbH , it was in 1950 (together with Otto Palme), the new company Bellinda (lateinisierter name of Schönlinde ), which, since 1998, again in the Czech Republic , since 2005 Bellinda Česká republika sro in Dolní Ředice near Pardubice .

The Edwin Jäger company, based in Schönlinde at today's Varnsdorfer Straße 76, was founded in 1923 and focused on the production of silk tights, sports stockings and socks. It was nationalized in August 1945. The company's assets and factories were incorporated into the state-owned company ELITE in Varnsdorf in 1948.

The stocking factory AG was founded in 1929 and belonged to the family business of Theodor Reiser, owner of the Albert Reiser company in Klokočov near Příbor . In December 1945 the company was nationalized. The owner Theodor Reiser was a Swiss citizen and filed a complaint against the nationalization. The company's assets were transferred to the state-owned fine stocking factory in Varnsdorf in 1946.

The hand weaving mill ROHI was founded in 1933 and was located in Schönlinde at Gerberstraße 15. In 1935, the former Anton Friedrich spinning mill in Prager Straße was taken over. After the Second World War it was first under national administration and then went into liquidation.

Hielle & Koch was founded in 1933 by Fritz Hielle, a son of Paul Hielle (owner of Hielle & Wünsche), and Dr.-Ing. Lothar Koch founded as a subsidiary of Hielle & Wünsche. After the Second World War, it was nationalized and taken over by the fine stocking factory Varnsdorf as a state-owned company.

The city has been connected to the railway network since 1868. Today's railway line 081 from Děčín to Rumburk runs through the town, where there are two stops, the “Krásná Lípa” station and the “Krásná Lípa město” station.

The place can be reached via the following roads:

Cities and towns in the Okres Děčín