The title of this article is ambiguous. Further meanings are listed under Father (disambiguation) .

Father means a male parent of a person; his paternity can refer to one, two or all three areas of parenthood:

A person can therefore have more than just one father. In modern small families , all three areas of fatherhood are usually perceived by the mother's ( spouse ) partner , but there are also other forms of parenting, for example single father , stepfather of a stepchild, father in a same-sex marriage , foster father for a foster child or biological sperm donor only .

The word "father", like many other family names , is one of the oldest parts of the vocabulary and goes back to a common predecessor of many of today's Indo-European languages . Forms originally related to the German father in related languages ​​are in ancient Indian Sanskrit pitar, Greek pat e r , Latin p a ter , as well as Old Irish athir and New Irish ahir . Gothic fadar has been handed down from the 4th century . German-language variants include Old High German fater (similar to English father ) and finally New High German father .

The term father is used in other contexts as a founder, causer or producer, for example as "father of thought" or "father of success". In old expressions such as "The fathers said ...", fathers stands for the ancestors (ancestors, ancestors ). In the German-speaking cultural area , fatherland is used in the sense of home . In Christianity , the designation God the Father denotes the paternal nature of the God venerated as a Trinity ( Trinity ).

The relationship between the sexual act and reproduction can only be derived experimentally; it is not immediately obvious. In contrast to birth, conception cannot be observed. The long period of time between conception and birth does not help to make the connection between them clear. On the contrary: it makes it more difficult to guess a connection. Therefore, for a long time, people did not know that the man fertilized the woman. The ability to reproduce was probably only ascribed to women; only she guaranteed the preservation and increase of the community. Since reproduction was of great importance, women were given a leading role. According to various authors, this state probably lasted throughout the entire Palaeolithic and Mesolithic. Agriculture and cattle breeding emerged with the Neolithic Age. This prompted the women, who primarily looked after the cattle, to make observations that led to the discovery of the connection between sexual intercourse and reproduction. It was probably noticed that the females did not give birth if they were kept apart from the males, or if the males were slaughtered because they were not given any benefit for the reproduction of the cattle. So one day our ancestors discovered that the male animal played a role in producing offspring. From this it was deduced that this also had to apply to humans.

The psychologist Anne Storey of the Memorial University of Newfoundland found in 2000 that the characteristics of fatherhood are mainly shaped by the hormone level during the woman's pregnancy. In a study with couples, she discovered significant changes in the hormonal balance of expectant fathers in cortisol , prolactin and testosterone levels . While prolactin levels rose by around 20%, testosterone levels decreased by an average of a third after birth. The result is a change in behavior on the part of the father to be more caring. Pheromones from the pregnant woman are suspected to be the trigger . Furthermore, hardly any differences were found between biological fathers and “surrogate fathers”.

Fatherhood in the Animal Kingdom

Active fatherhood in the animal kingdom has been observed in the emperor penguins , for example . In 2005 the social researcher Wassilios Fthenakis named further examples from the animal world, such as the stickleback, in his standard work “Fathers” . Here fathers distinguish themselves primarily through brood care . The anthropologist Sarah Blaffer Hrdy emphasized that the division of educational tasks develops especially in monogamous relationships in a species, since the males can be relatively sure that they are investing in their own offspring. Thus, among the primates, the active father role of the monogamous marmosets is more pronounced than that of the polygamous chimpanzees .

There are three possible options for paternity (in descending order) ( Section 1592 BGB ):

The Düsseldorf Higher Regional Court decided on July 31, 2015 that paternity can only be established after the birth of a child. Legal paternity for an embryo is not provided for under German law. Because of the fundamental importance of the matter, the Senate has admitted the appeal on points of law to the Federal Court of Justice against its decision.

According to the case law of the Federal Constitutional Court, the legal father has a right to know whether he is also the biological father.

Legal paternity can also be established or changed through adoption .

Section 1600 (2) and (3) BGB state that the biological father cannot contest the paternity of the legal father if the legal father lives with the child in a "social-family" relationship or lived at the time of his death.

According to a decision of the Cologne Higher Regional Court of November 30, 2009, the legal relationship to the child remains unaffected by gender reassignment measures in the parent, even if these took place before the birth; at the registry office, however, the father's former male first name must be entered "in order not to give rise to speculation with third parties and to prevent the risk of disclosure of the transsexuality of a parent".

The presumption of paternity, the acknowledgment of paternity or the judicial determination of paternity, which has existed in the form known today since the entry into force of the illegitimate law on July 1, 1970, have numerous legal consequences .

A relationship to the child arises between the legal father (and all his relatives ). If the mother is a foreigner and the father is German, the child also receives German citizenship . In such a case, there is permanent dual nationality. In addition, there are rights to refuse to testify ( Section 52 StPO ).

The paternity at the same time establishes the maintenance obligation and also the moral obligation to pay for the maintenance of the child until the completion of an education corresponding to his inclination ( §§ 1601 ff. BGB ). Furthermore, according to § 1615l BGB maintenance claims for the child mother , as well as inheritance claims after the death of the father . The special provisions for illegitimate children (so-called premature inheritance compensation) were abolished by the Childhood Law Reform Act on July 1, 1998.

Social law claims also arise, e.g. B. on co-insurance of the child in the father's health insurance ( family insurance ) as well as entitlement to an orphan's pension in the event of death .

Likewise, the determination of paternity for the child has the consequence that, when they reach the age of majority, they are in principle responsible for their parents.

See also : Law to strengthen the rights of the biological, non-legal father

Fatherhood in the Social Sciences

There is basically no evidence, but above all for the distinction between social paternity vs. just social father . - Chiananda ( discussion ) 15:26, Feb. 28, 2014 (CET)

Social scientific theories - such as social constructivism - understand that father is the person who perceives the social role of fatherhood, the social father .

The spouse of the mother of an unknowingly illegitimate child, an adoptive father , stepfather or foster father , and, in a broader sense, a partner of a parent who assumes a binding father role towards the child are also considered to be a social father . This father role develops step by step in the relationship with the child and requires mutual readiness for it; the child can be overwhelmed by assuming the role of a father. Are also role conflicts between the father's role and the role as a husband or partner of the mother possible. 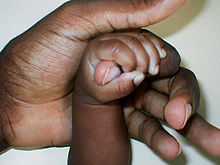 Hands of father and son

In a report " Facets of Fatherhood " prepared for the Federal Family Ministry, the genealogist Wassilios E. Fthenakis traced the changing image of the father over the past 300 years: He describes the development of the father role from the family patriarch in the 18th century to the worker father, who is increasingly losing authority of the 19th century , the proud sole breadwinner in the economic miracle of the 1950s, the divorced father fighting for custody of the 1980s to the so-called “new father” of the present based on partnership. Despite these changes, the image of the father in the western understanding of culture is still strongly influenced by the role of the family's financial provider, who only intervenes in crisis situations. This makes it difficult for fathers to spend more time in everyday life with their children and to put aside professional interests. Housekeepers who take care of the children's daily needs are still the exception in quantitative terms. Some non-governmental organizations advocate changing the role of the father to an “active”, caring father. In Germany these are for example the Fathers Expert Network Germany eV, the Bundesforum Männer eV and the Fathers Center Berlin .

Data from the Techniker Krankenkasse showed that the proportion of fathers among recipients of child sickness benefit rose continuously from around 18% (2005) to over 22% (2009).

The Mainz psychologist and psychoanalyst Inge Seiffge-Krenke summarized the research results and explained the differences in the parenting behavior of fathers and their role on the offspring in humans.

Long-term studies by the sociologists Paul Amato and Alan Booth from Pennsylvania State University showed that the educational level and income of the fathers was commensurate with the educational achievement of the children. In addition, a further study by the Oxford Center for Research into Parenting and Children showed that fathers' commitment to bringing up their sons can significantly reduce later delinquency and protect daughters from psychological stress in later life, while neglecting the upbringing or the complete absence of the father increases it School performance disorders can occur. In addition, adolescents can suffer from a lack of self-confidence and later be more prone to mental illness and addiction problems . However, these vulnerabilities do not necessarily occur after a separation, as a substitute or the active father of the divorce can help stabilize the situation.

The role of father has been reflected in many ways in the arts. Important examples of the role of the “social father” are the tragedy Hamlet by Shakespeare and, more recently, the feature film Fanny and Alexander by Ingmar Bergman . Fathers, father-son and father-daughter relationships are the central theme of many films, important examples: