The study of these concepts and their application can be of interest to both business organization theory and organizational sociology.

In the single-line system, the arrangement of the line goes directly to the points below. There is clear authority and a clear reporting channel. A tight structure and a clear definition of authority and responsibility.

Example of a single line system

Fayolsche Brücke - connection of hierarchically not directly subordinate positions by exchanging information laterally with the tolerance of the superiors.

The single-line system goes back to Henri Fayol , who initially described it as a “general administrative principle” in his main work Administration Industrial et generale ( General and Industrial Administration ). The approach is based on Fayol's principle of the unity of order placement - each position is only subordinate to a single authority. Due to the strict adherence to the hierarchical service channel, the entire communication ideally runs only via the line as the only permitted connection channel.

The result of this concept is a tight, clear organization in which overlapping competencies are avoided. The clear delimitation of areas of responsibility means that the implementation of decisions made can be easily tracked and monitored.

The practicability of the approach is bound to certain requirements. Discipline and obedience are required from employees who must adhere to detailed instructions. These detailed instructions must be drafted by qualified managers and their implementation must be monitored.

The single-line system quickly reaches its limits if the line span (or the organization as a whole) becomes too large. The result of rigid, too long instance paths is an obstruction or falsification of the flow of information between the positions as well as a lack of dynamism in the work processes. Furthermore, the burden on managers is very high, who have to process all information and decisions alone and are burdened with routine tasks. Any loss of motivation in the subordinate positions was not taken into account at the time.

The problems of an optimal management span and the stress on executives were already known in Fayol's time and discussed, for example, by Luther Gulick , who among other things introduced the concept of staff units borrowed from the military . This extension of the one-line system resulted in the staff line organization , in which the staff units relieve the line instances and make the superiors less dependent on the subordinate area.

Fayol himself also drafts a concept to address the problem of long official channels, the Fayol Bridge .

The single-line system is a typical form of organizational structure for newly founded companies (especially small and medium-sized companies ) as well as for stable, bureaucratic organizations and for those who place great value on discipline and clear command structures. The latter include the military or the fire service . Public administration can serve as an example of bureaucratic applications , for which the single-line system is in principle the most widely used system.

Since many of the disadvantages do not apply to smaller groups or teams, the one-line organization is also often used as an organizational form in project management . 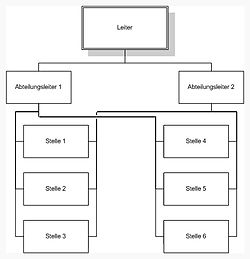 Example of a multi-line system

The multi-line system is based on the “ function master system” coined by Frederick Winslow Taylor (a contemporary of Fayol) . Here a universal master is replaced by so-called function masters. They are specialists in their field and only give instructions relating to their area of ​​expertise. The system of multiple subordination is important: A subordinate position can now receive instructions from several higher-level positions. In this way, the principle of the shortest route is implemented, since an employee can now contact the specialist concerned directly.

The advantages are specialization of the management through the distribution of functions, high problem-solving capacity, direct instruction and information channels, emphasis on specialist authority, advantages of exercise and shorter training times.

Disadvantages are problems with the delimitation of responsibilities, the risk of conflicts of competency, and difficulty in attributing errors.

Mostly in small businesses and partnerships , e.g. B. in craft businesses where the clear separation of commercial and technical responsibilities means that the risk of frictional losses due to disputes over competence is minimal; in addition, within the framework of matrix organization and project organization .

Multi-line systems are described as partial orders in mathematics . In computer science, there is also in the field of object-oriented programming , the multiple inheritance , subject to the same principle.