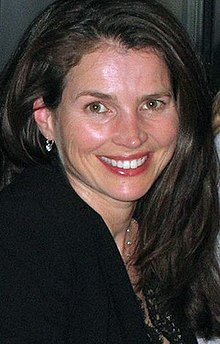 She is the daughter of Josephine, a lab technician, and John Ormond, a stockbroker. She is the second oldest of her parents' five children. After finishing school, Julia Ormond wanted to follow in the footsteps of her grandparents, who were artists, and attended an art school . However, she did not finish her training, but moved to the Webber Douglas Academy of Dramatic Art , which she graduated in 1988.

Her film career began in 1989 with the British miniseries Traffik , which Steven Soderbergh later used as the basis for the movie Traffic - Power of the Cartel . Two years later she got the leading role in the international television production Die Junge Katharina . Here Ormond portrayed the young Catherine the Great and received a nomination for the Gemini Award. Her first film role was in Peter Greenaway's controversial film The Miracle of Mâcon . She achieved her breakthrough alongside Brad Pitt in Legends of Passion , followed by The First Knight and Sabrina . She then showed her dramatic skills in the lead role as Smilla Jaspersen in Miss Smilla's Feeling for Snow , the film adaptation of Peter Høeg's bestseller . She shot with other important directors, such as The Barber of Siberia , a Russian epic by Nikita Michalkow , and Inland Empire , shot by David Lynch . Che - Revolución was the first part of the long-announced Hollywood film about the life of Che Guevara , for which Soderbergh was responsible. In 2010 Ormond received an Emmy for her supporting role in Eustacia in the television production You Don't Go Alone . In August 2012, she received her first series lead role as Joanna Beauchamp in the mystery series Witches of East End , which was broadcast from October 2013 to October 2014 by the US broadcaster Lifetime .

In addition to the films, Julia Ormond kept her interest in theater work.