The Dornier Do 17 was a twin-engine fighter aircraft made by the German manufacturer Dornier . The model was initially designed as a twin-engine high - speed airliner and was used by the Air Force as a bomber and reconnaissance aircraft during World War II . Later the machines were also used as a tow plane for cargo gliders .

The development of the shoulder- wing wing with double vertical tail and retractable tail wheel landing gear goes back to a tender from the Army Weapons Office in 1932. The slim torso earned her the name "Flying Pencil".

Soon after taking power in 1933, the Nazi regime began arming the Wehrmacht . The Do Y , initially offered as a "high-speed airliner" under the designation Do 15, was rejected. The then completely redesigned Type Do 17 was accepted by the newly created Reich Aviation Ministry (RLM), which then placed an order for two prototypes. The first flight took place on November 23, 1934.

Flight tests showed the usability of the machine for military use. From the outset, both liquid-cooled V-engines and air-cooled radial engines were intended as drive. The Do 17 MV1 - a prototype designed for high-speed flight - won the alpine tour for multi-seat military aircraft at the IVth International Flight Meeting from July 23 to August 1, 1937 at the Dübendorf military airfield near Zurich and thus won international attention. The deployments of 32 Do 17 in the Spanish Civil War (nickname " Bacalao "; "Stockfisch" ) with the Condor Legion in the test bomber squadron 88 and the reconnaissance squadron 88 yielded numerous new insights.

The Do 17 was produced in several variants from August 1936 to October 1940. The first two series versions E and F were powered by twelve-cylinder V-engines of the type BMW VI 7.3 , while later versions were equipped with the more powerful nine-cylinder Bramo 323 "Fafnir" radial engines, which were also less sensitive to fire because of their air cooling. The Do 17Z with Bramo 323, produced from 1939 onwards, was the most powerful and, with at least 535 machines, the most frequently built version. As the last Do-17 variant, 101 copies of the Dornier Do 215 were produced from December 1939 to January 1941 , which was basically a modified Do 17Z with liquid-cooled V12 engines of the type DB 601 .

Many machines were lost in the Battle of Britain , and from the end of 1940 the Do 17 was increasingly replaced in the bomber units by newer models with a higher bomb load and range such as the Ju 88 and the He 111 . Some of the remaining operational aircraft were converted into reconnaissance aircraft (Z-3), training aircraft (Z-4), weather scouts (Z-5) and night fighters (Z-7, Z-10, a maximum of nine) or to allied countries (Bulgaria , Finland , Romania).

Dornier's experience with the Do 17 was incorporated into the development of the heavy twin-engine Do 217 bomber . Although this looked similar to the Do 17, it was a new development. 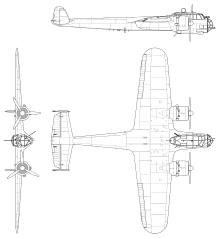 Production of the Do 17 for the Air Force : 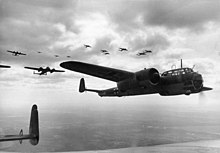 There is currently no fully preserved example in any museum, only parts of individual aircraft are on display. In the summer of 2007, a well-preserved wreck of a Dornier Do 215 B-5 (a variant of the Do 17 Z) was found in the Dutch part of the Wadden Sea .

In 2008, the well-preserved remains of a Do 17 Z-2 were discovered in the silt of the English Channel near the Goodwin sandbanks . The machine with the squadron ID 5K + AR (Season 7, Group III. Kampfgeschwader 3 , work number 1160) had on 26 August 1940 by the airfield St. Trond out together with aircraft of kampfgeschwader 2 in an attack on the RAF -Flugplätze at Debden ( District Uttlesford ) and Hornchurch near London , but already lost orientation on approach above the clouds and was separated from the formation. Shortly thereafter, she was inspired by some Paul Defiant Boulton - fighters attacked the RAF Squadron 264th The cockpit and both engines were hit, one of which failed and one was damaged. The wounded pilot Willi Effmert decided to ditch on the sandbanks and previously dropped his 740 kg bomb load. At 1:40 p.m. the machine landed on a sandbank with its landing gear retracted and overturned in the process. The pilot and observer were able to save themselves and survived as prisoners of war, while radio operators and bombardiers were killed. Their bodies were later washed ashore in England and Holland and buried there. In June 2013 the wreck was recovered and then brought to the Royal Air Force Museum in Cosford . According to the museum, it will initially be treated there for two to three years in a new type of preservation process specially developed for this aircraft. Since October 2013, parallel to the conservation, an exhibition has been shown in the museum in Cosford which shows the recovery of the wreck and the history of the aircraft. An "Interpretation Zone" in the RAF Museum in London, sponsored by the Belarusian computer game developer wargaming.net with £ 75,000, allows additional visitors access to this historical find using augmented reality techniques .

Commons : Dornier Do 17  - Collection of images, videos and audio files