The Dornier Do 335 was one of Dornier manufactured by German fighter plane of World War II . The arrangement of one engine at the front and one at the rear was unusual for German aircraft construction, which made the Do 335 the fastest piston engine-powered aircraft at the time of its maiden flight. Although this took place in October 1943, the pattern was no longer used in combat due to the war.

In 1937, Dornier had the principle of a pusher propeller with long-distance shaft patented. In 1939 Ulrich W. Hütter and Schempp-Hirth Flugzeugbau built the Göppingen Gö 9 test aircraft to test the functionality of this drive configuration. After the successful tests, Dornier used the concept in the Do P.231 project in 1942, which then became the Do 335.

The first flight of the prototype took place on October 26, 1943 at the Mengen-Hohentengen airfield . 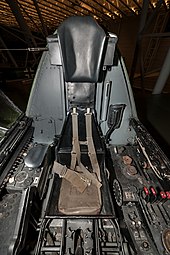 In 1944 and 1945 only a few series machines were produced in different versions as fighters , fighter-bombers and reconnaissance aircraft ; After the long development period, mass production was no longer possible due to the poor economic situation. At the end of the war, 28 pilot series and 11 series aircraft had been completed; for a further 50 parts were available or in some cases in an advanced state of construction.

Two further developments were planned: the Do 435 with two Jumo-213 engines, an extended fuselage and enlarged wings, and the double-fuselage version of the Do 635 . In addition to the Dornier works, other locations for series production were the Bunker Weingut II in the Welfen barracks and the Heinkel works in Oranienburg .

The long nose and the long-legged construction gave this aircraft the official name "Pfeil" (for the single-seat version) and "Anteater" (for the two-seater).

This series is characterized by more powerful engines and improved details. 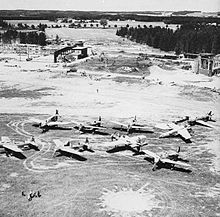 Nine Do 335s parked in Oberpfaffenhofen in 1945 (also two-seater variants), mostly without engines

The aircraft was to be used as a fast fighter, fighter, reconnaissance aircraft and also bomber. The engines, one behind the other, enabled low air resistance and thus high speed and long range. Further advantages were a low moment of inertia, good maneuverability around the roll axis and a yaw moment- free flight in the event of an engine failure. The propellers lying one behind the other increased the power efficiency, the engines specifically needed less fuel than lying next to each other. Depending on the version, the speed was up to 775 km / h and the climbing power to 8000 m was eleven minutes. With the installation of an ejection seat system, another new element was used.

The experience report of the test command 335 in the Rechlin test center of January 23, 1945 also revealed weaknesses of the Do 335 and called its use into question. With this criticism it must be taken into account that the development and construction of the aircraft suffered from time pressure and the lack of materials in the last years of the war. At the beginning of 1945 the machine still had a number of technical problems. Mentioned were, among other things, an unfavorable design of the nose landing gear, a new, still unreliable hydraulic system for the flap actuation, a still poor regulation of the engine cooling, poor visibility, as well as the laborious closing and opening of the cabin roof due to the new ejection seat when entering and also during manual emergency exit. In the opinion of the testers, it was thus far from being suitable as a combat aircraft. Compared to single-engine combat aircraft, however, a naturally higher production effort and fuel consumption as well as a higher maintenance effort due to the two engines were noted.

Series production has started. One machine was shot down by Allied fighters on a transfer flight. In the case of another two machines, the cause of the loss is unclear. The Do 335 was no longer used by the Air Force.

The front draft propeller was driven by a conventionally built-in motor in the nose of the fuselage; the second motor was installed in the central fuselage and connected to the pusher propeller behind the tail unit via a three-meter long remote shaft. This unconventional propulsion principle meant that the air resistance was hardly greater than that of a single-engine aircraft. This enabled extraordinarily high flight performance to be achieved: With a top speed of 730 to 770 km / h (depending on the version), the Do 335 was the fastest mass-produced aircraft in the world with a piston engine .

Another advantage of this configuration was the relatively high roll rate compared to other twin-engine machines , since the location of the heavy engines near the aircraft's longitudinal axis meant that the moment of inertia was low. In addition, the failure of an engine did not lead to an asymmetrical thrust distribution.

The ejection seat was also a special feature of this aircraft . When this was activated, the rear propeller and the upper vertical stabilizer were blown off for the safety of the pilot. 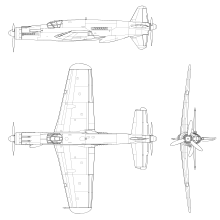 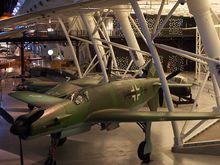 The last Do 335 is open to the public today. In the late autumn of 1944, the Do 335 A-0 with the trunk identification VG + PH (serial number 240102) was transferred to the Rechlin test center . Shortly before it was occupied by Soviet troops, the chief aviator engineer Hans-Werner Lerche relocated the machine according to orders and flew it to Oberpfaffenhofen with a stopover in Prague and Lagerlechfeld . At the end of the war, it was brought to the USA as one of two Do-335 machines as part of Operation Seahorse (securing high-quality German aircraft) with the aircraft carrier HMS Reaper . There she came to the US Navy test center ( Naval Air Station Patuxent River ). After testing was completed, the machine was handed over to the Smithsonian Institution's National Air Museum . After the war was only over two years, they did not want to exhibit them there. Therefore, the aircraft was dismantled and stored in the depot of the Paul E. Garber Facility . Private initiatives and the support of Lufthansa made it possible to return from the USA to Germany in 1974 and to restore it at Dornier in Oberpfaffenhofen, the exhibition of the finished machine at the 1976 air show in Hanover and then to remain on loan at the Deutsches Museum in Munich until 1986 . Today it is in the Steven F. Udvar Hazy Center near Washington's Dulles International Airport . A replica of the Do 335 that has been started is on the grounds of the Aircraft Museum in Villingen-Schwenningen , which could no longer be completed due to the death of the museum owner Manfred Pflumm.

Commons : Dornier Do 335  - Collection of images, videos and audio files