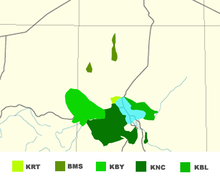 Distribution area of ​​the Kanuri dialects

Kanuri is a regional lingua franca of the Chad Basin in Cameroon , northeastern Nigeria , eastern Niger and western Chad , beside the Luo , the largest of the Nilo-Saharan languages to their saharanischem branch it is expected. In the Borno state of Nigeria, it is used in primary school education, the mass media and parliament.

The main dialects are:

The standard language is based on the Yerwa dialect. The Kanembu dialect was previously considered an independent language.

The Kanuri is a tonal language with two base tones (high / low), from which the rising, falling and middle tones are combined.

The language is distinguished in the morphology of the verb by a rich use of prefixes and suffixes that express different modes , aspects and derivations . The person is also marked on the verb, for both the subject and the object . Modes and aspects are sometimes also identified by tone patterns.

The subject morphemes are as follows:

There are basically two verb classes, one of which is characterized by the formative -n , which can be traced back to a verb for “say”.

The nouns have no gender , but have a plural , which is indicated by the suffix -wa . Various suffixes are used to mark the semantic roles in the sentence (agent, patient, dative / allative, ablative, possessor). There are also a number of word formation morphemes .

The basic word sequence in the sentence is subject-object-verb .

The few foreign words in Kanuri are mostly of Arabic origin.

Some words and phrases: