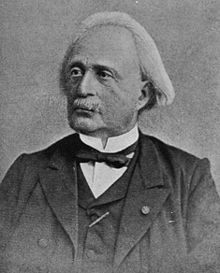 Jules Oppert, who came from a Jewish family in Hamburg , was a brother of Gustav Salomon Oppert and Ernst Oppert . He was trained at the Johanneum in Hamburg. In 1844 he began studying at the University of Heidelberg and then moved to the University of Bonn to study Oriental Studies , which he continued in Berlin and Kiel . In Kiel he received his doctorate in 1847 on "De Jure Indorum Criminali". In 1847 he left Germany and went to France. He was received with open arms by scholars such as Jean Antoine Letronne , Eugène Burnouf , Félicien de Saulcy , and Adrien Prévost de Longpérier , as his work “Phonetic System of Old Persian” (1847) was considered one of the most important works for understanding the Old Persian language . In 1848 he became a high school professor in Laval , where he taught German . In 1850 he was called to Reims .

In 1851 he took part as an Assyriologist in an expedition to Mesopotamia and the Media , led by Fulgence Fresnel and accompanied by Félix Thomas as an architect . Here he finally identified the ruins of Babylon as Babylon. In 1854 they returned without Fresnel, who stayed in place and died in Baghdad in 1855. In the following years he published his findings in two volumes "Expédition Scientifique en Mésopotamie". In 1854 he received French citizenship for his services to French science. In 1855 he was sent to England to examine the collection of the British Museum . In 1856 he returned to France, where he was awarded the Cross of the Legion of Honor (in 1885 he became an officer of the Legion of Honor). In 1857 he became a professor of Sanskrit and comparative linguistics . In 1859/1864 his last major and at the same time most important work on the subject of an Indo-Iranian language appeared: “Grammaire Sanscrite” (2 volumes). In the meantime Oppert had gained such a good international reputation that he was appointed in 1857 with William Henry Fox Talbot and Edward Hincks as a reviewer of the Royal Asiatic Society for the deciphering of the ancient Persian cuneiform by Henry Rawlinson .

In the period that followed, Oppert began to focus on Assyriology. In 1869 he became a lecturer in Assyriology at the Collège de France , and in 1874 professor of Assyrian philology and archeology. During his trip to Mesopotamia he discovered written documents that could not be assigned to any of the other languages. At first he called it "Casdo-Scythian", later he gave the language the name Sumerian, which is still used today, due to the title used by the Akkadian kings: King of Sumer and Akkad . At first, however, Oppert's theory could not prevail. Only after further discoveries in Nineveh (bilingual texts) and in Girsu could the existence of this language and thus the existence of the Sumerian people be proven almost 20 years later . In the following years he dealt with inscriptions , Assyrian astronomy and astrology , Babylonian treaty texts. As an author of scientific works, he was very productive.

From the second half of the 1970s and into the 1980s, Oppert was primarily concerned with biblical studies. He researched, for example, the Book of Esther , the Book of Judit and Solomon . He also dealt with the language of the Medes . On March 18, 1881 he became a member of the Académie des Inscriptions et Belles-Lettres (he replaced the Egyptologist Auguste Mariette ), in 1890 vice-president of the academy and in 1891 president. In 1862 he was accepted as a corresponding member of the Prussian Academy of Sciences . From 1900 he was associated with the Bavarian Academy of Sciences as a corresponding member.

Even at an advanced age, Oppert remained productive. By 1902 he had published no fewer than 427 titles. A large part of these were articles in French, partly also German and English magazines (with Ledrain he founded the magazine "Revue d'Assyriologie", which he also published, at the " Zeitschrift für Assyriologie " founded by Carl Bezold in 1886 he was a longstanding co-editor) .

As a Jew, Oppert was also interested in Jewish history throughout his life. He was a diligent employee of the "Revue des Etudes Juives", since 1876 a member of the central committee of the Alliance Israélite Universelle (for a while he was its vice-president) and a member of the " Consistoire central des israélites français ".