This article explains the column base. For the pedestal of a coat of arms, see pedestal (heraldry) .

Pedestal is a redirect to this article. For further meanings see pedestal (disambiguation) .

Base of the New York Statue of Liberty

The pedestal , also the pedestal ( Middle French . Piédestal , Italian. Piedestallo , to Italian. Piede “foot” and stallo “seat”) is a sometimes quite elaborately designed substructure or base of buildings, columns or sculptures such as sculptures and statues . In the 19th century, the term basament , which is related to the pedestal, was used in Italian, but could also stand for foundation wall , substructure or ground floor .

If a pedestal is just a simple, low base plate, this is called a plinth . Small pedestals or pedestals, for example on the gables of buildings for vases or statues, are also referred to as "picture chair" or "picture chair". Typical base elements are the " cornice ", the "pedestal shaft " and the "cornice".

Pedestals of memorials and monuments often contain an inscription or an inscription plaque on the people involved or represented in the erection, the context of events and other data. 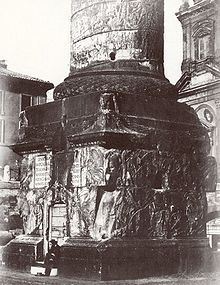 Foot of the Trajan Column around 1860

The Roman Emperor Trajan had his successes in the Dacer Wars depicted on the statue known as the Trajan Column in Rome . The pedestal had various tasks: First it represents the entrance to the column that can be walked on, then it was designed as a storage place for the emperor's urn and finally it functions as a bearer of the dedicatory inscription.

The equestrian statue of Frederick the Great by Christian Daniel Rauch from 1851 in Berlin also has an artistically and structurally complex base construction.