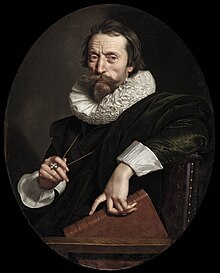 Marino lived as the protégé of Cardinal Aldobrandini in Rome , Ravenna and Turin . In 1615 he was appointed to the court of Maria de 'Medici in Paris . In 1622 he met the young Nicolas Poussin , whom he promoted, and who made sixteen pen drawings for him for the Metamorphoses of Ovid and his epic L'Adone . His epic L'Adone , which was published in Paris in 1623, describes the love story of Venus and Adonis in 45,000 elegant verses .

In the same year he returned to Rome, where he also achieved great success. Although he had important patrons in Cardinal Pietro Aldobrandini, Duke Charles Emanuel I of Savoy and Maria de 'Medici, he was involved in so many disputes that he was jailed several times.

Marino is buried in the crypt of the Church of Santi Apostoli in Naples.

The artistic style cultivated by Marino, laden with images and metaphors, which found many admirers and imitators in Baroque poetry , is referred to as “marinism”. The Spanish variety of marinism is called Gongorism after the Spanish poet Luis de Góngora (1561-1627) , the English variety is called Euphuism after the novel Euphues, or the Anatomy of Wit (1578) by John Lyly (1554-1606). In Germany he had a particularly strong impact on Christian Hoffmann von Hoffmannswaldau , Daniel Casper von Lohenstein and Diederich von dem Werder through his “bombastic” works . In 1715, Barthold Heinrich Brockes still translated his Bethlehemite child murder into German verse.

At the end of the 17th century, however, Marino's style was already being criticized by members of the Roman Accademia dell'Arcadia for its artificiality. 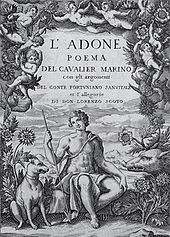 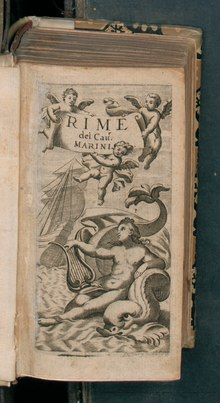