As the nephew of Clement VIII , who also came from the Roman noble family of Aldobrandini , he was cardinal depository during his pontificate and thus held a key position within the Roman Curia . After the death of his uncle, whom Paul V succeeded in the pontificate, he lost his influence. He lived a secluded life as archbishop in Ravenna , from where he led a long and intrigued struggle against his loss of power.

In accordance with early modern customs, Clemens VIII, after his election in 1592, promoted people from his family who were close to him to influential positions. Clemens made his nephew first castellan of Castel Sant'Angelo and a little later, together with his cousin Cinzio Passeri Aldobrandini, head of the papal secretariat of state. To underline his interest in a career within the Curia, Pietro Aldobrandini received minor church ordinations in December 1592. On September 17, 1593, Clement VIII made him cardinal deacon of San Nicola in Carcere . In 1605 he was made cardinal priest of Santi Giovanni e Paolo . In 1612 he changed the titular church and instead took over Santa Maria in Trastevere . 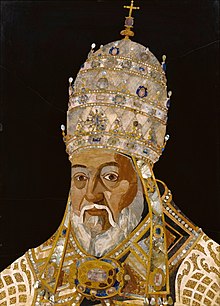 Clement VIII , mosaic around 1600 - with the death of the Pope, Pietro Aldobrandini lost his influence in the Vatican 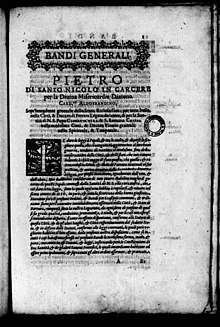 Cardinal Pietro Aldobrandini was characterized by great political skill. Among other things, he was involved in Henry IV converting to Catholicism . The peaceful running inclusion of Ferrara in the Papal States in 1597/1598 is due mainly to the actions of Pietro Aldobrandini. In the conflict between France and Savoy over the margraviate, he acted as papal legate . He managed to negotiate a lasting peace treaty in several months of negotiations. Pietro Aldobrandini was Grand Prior of the Grand Priory of Rome of the Sovereign Order of Malta from 1578 to 1598 .

The historian Tobias Mörschel has examined the life of Pietro Aldobrandini as a typical example of a cardinal nepot in more detail and examined, among other things, which offices Pietro Aldobrandini could unite during the pontificate of Clement VIII. Mörschel considers it to be a typical feature of early nepotism that Pietro was given positions that were associated with little work but high income. As a typical cardinal depository, it was his job to transfer as much money as possible from the papal coffers into family property. This behavior, which is immoral from today's perspective, was socially accepted to a high degree in the 16th century. According to the understanding of the time, a Pope also had the duty to look after the material well-being and advancement of his relatives.

Pope Paul V died on January 29, 1621. His pontificate of almost 16 years had been one of the longest in the past three hundred years. Cardinal Pietro Aldobrandini immediately rushed to Rome to attend the conclave . Indeed, he succeeded in thwarting the plans of the Cardinal Nepot of Paul V. This failed to get the candidate through, who would have continued to secure the influence of the Borghese family. Pietro Aldobrandini was more successful, whose favored candidate, the aged Cardinal Ludovisi, was chosen as a compromise candidate. This appeared as Gregory XV. his office.

The papal coronation did not live Pietro Aldobrandini. He died in Rome on February 10, 1621.