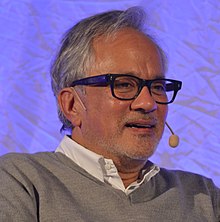 Sir Anish Kapoor (born March 12, 1954 in Mumbai , India ) is an Indo-British sculptor . Winner of some of the most coveted art prizes and high civilian awards, he is one of the world's most respected artists of our time.

Kapoor is the son of an Indian Hindu who worked as a hydrographer in the Indian Navy and a Jewish Iraqi woman. He left India at the age of sixteen, first lived in a kibbutz in Israel and came to London in 1973, where he studied art at Hornsey College of Art and later at Chelsea College of Art and Design . He also attended Doon School in Dehradun , India. His work shows influences from western and eastern culture as well as religious themes. Belonging to a specific religion is not evident from the works.

Kapoor received international attention as early as the 1970s for sculptures made from color pigments . Through monochrome room installations, he came to monumental sculptures made of unusual materials. His Marsyas (→ Marsyas ) from 2002 was installed in the turbine hall of the Tate Modern in London. An altar stone created by him is located in the lower church of the Dresden Frauenkirche . In 2003 he erected a 20-tonne red sculpture made of Vaseline and wax entitled My red Homeland for a work exhibition at the Kunsthaus Bregenz . In 2006, Cloud Gate , also known as "The Bean," followed, a 110-ton stainless steel structure in Millennium Park in Chicago . In 2008, Kapoor created the 24-ton steel sculpture Memory in Berlin, a commissioned work for the Deutsche Guggenheim , and in 2009/2010 it was on view at the Solomon R. Guggenheim Museum .

Kapoor designed the ArcelorMittal Orbit , a 115-meter-high sculpture for the 2012 Olympic Games in London. The construction consists of twisted steel struts and is reminiscent of the shape of an oriental water pipe . There is a viewing platform at the top. The steel tower has been open to the public since 2014.

Also in 2012, Kapoor created the set for a new production of Richard Wagner's old work Parsifal at the Nederlandse Opera in Amsterdam. It was staged by the director of the opera house, Pierre Audi , and directed by Iván Fischer . The costumes were designed by Christof Hetzer .

Kapoor has secured the exclusive rights for the use of the substance Vantablack in the field of art from the manufacturing company Surrey NanoSystems ; In other areas, the surface coating can still be used freely. Kapoor's exclusive rights to Vantablack are the subject of an ongoing controversy. Among the pronounced critics of Kapoor are the British painters Christian Furr and Stuart Semple .