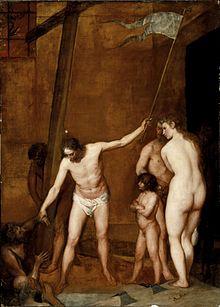 Limbus ( Latin for “edge”, “hem”, “boundary”), colloquially also “limbo” , in Catholic theology denotes a place (popularly also known as “vestibule” or “outermost circle of hell”) who are souls who through no fault of their own are or were excluded from heaven and the eternal view of God .

In theology, a distinction is made between the limbus of the fathers (Limbus patrum) , which ended with the death and resurrection of Christ , and the limbus of children (Limbus infantium or Limbus puerorum) , which was traditionally regarded as the place for the souls of unbaptized children .

The limbus infantium is a theological speculation that results from the dogmas of the church on topics such as sin, original sin , redemption and baptism and was "general Catholic teaching until the middle of the 20th century".

Neither the limbus patrum nor the limbus infantium have a biblical foundation. Their conception arose from the question of the necessity of the redeeming death of Christ and the requirement of baptism for the salvation of souls. As such, the concept of limbo as a place was never dogma , but merely part of theological speculation in which the concept of limbo was represented as a theory.

Historically, there were also different ideas about what limbo meant:

Theological discussion of the limbus puerorum

Ever since the doctor of the church Augustine of Hippo formulated the doctrine of original sin , theology saw baptism as indispensable for salvation and thus redemption . Augustine thought it impossible for unbaptized children to enter Paradise or even any other place of bliss (see unbaptized children ). The Synod of Carthage in 418 consolidated this doctrine and with it the view that infants who die unbaptized go to hell.

In the Middle Ages this teaching was toned down again: According to her, the place for the souls excluded from heaven through no personal fault was a place on the edge or edge of hell, called limbus (“thin layer”). Petrus Abelardus (1079–1142) taught that such children did not suffer any sensory punishment, only the loss of the vision of God. In the 13th century, Thomas Aquinas described Limbus puerorum as a place of eternal natural bliss. The Dominican Hugo Ripelin of Strasbourg stated in his Compendium theologicae veritatis (1268) that this place was above the hell of the damned.

The Council of Ferrara / Florence (1431 to 1445) confirmed the teaching of the Synod of Carthage that baptism is indispensable and that people who die in the sole state of original sin go to hell.

In the 18th and 19th centuries, individual theologians (Bianchi 1768, H. Klee 1835, Caron 1855, H. Schell 1893) formulated theses on how children who died unbaptized could still be saved. In 1952, the theologian Ludwig Ott was able to implement this as a possibility in his outline of Catholic dogmatics , although he nevertheless presented limbo as the conventional, established view.

In the 1992 world catechism , the term limbo is no longer found. There it says:

What this path of salvation looks like is not known, as there was no revelation about it.

Since November 2005 the Papal International Theological Commission has dealt with the subject. On April 20, 2007, Pope Benedict XVI approved . the results of the International Theological Commission and enabled the evaluation of the teaching of limbus puerorum as an older theological opinion not supported by the church teaching office . The Archbishop of Dijon, Roland Minnerath , explained the decision: The theologians of the commission had come to the conclusion that the souls of unbaptized, deceased young children would go straight to Paradise . However, the document of the International Theological Commission also states (in paragraph 41) that limbo " remains a possible theological opinion". The Limbus not part of the doctrine of the Catholic Church, but it remains a theory that does not condemn the church and the faithful zubillige. Benedict XVI. I had this in mind before the election as Pope. The British daily Times quotes his report on the state of faith from 1985: "Personally, I would give it up because it was always just a hypothesis." Gerhard Ludwig Müller says:

“In relation to these less binding statements, the more recent conception of Vatican II regarding the possibility of salvation for the non-baptized must be observed. This means that all limbo theories are outdated. "