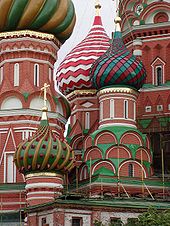 The small dome on the left belongs to the chapel in honor of St. Basil 1588, which gives the entire cathedral its name

The history of the cathedral begins in 1552 with the building of the Church of the Holy Trinity in honor of the victory of the Russian army over the Tatars (more precisely: the Kazan Khanate ) at the end of the Moscow-Kazan Wars . Just three years later, the wooden church of the Holy Trinity was demolished. In its place, the St. Basil's Cathedral was then built by order of Tsar Ivan IV (Иван).

According to some sources, the architect of the building was Postnik Jakowlew (Russian Постник Яковлев ), who was responsible for the construction together with Barma (Russian Барма ).

According to a legend, after completion of the construction (1561), Ivan asked the architect Yakovlev whether he would be able to build such a beautiful cathedral again. He replied that he could build an even more beautiful cathedral. Thereupon the Tsar is said to have had his eyes gouged out so that he could not erect anything of comparable beauty anywhere else. The legend, however, is fictitious, as Postnik Jakowlew later demonstrably built many buildings in several cities, and the chapel in honor of Basil the Blessed was also built by Postnik Jakowlew himself four years after Ivan's death. 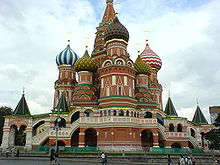 The cathedral seen from the west (on the left the Red Square, on the right the Moskva , in the back the Kremlin wall ). From this point of view, the symmetry of the building becomes clear

The cathedral has nine main domes, the tallest of which is 115 meters high, each of which is different in appearance and color from the others. However, the cathedral itself is built entirely from simple red bricks and, unlike many Russian churches, is not painted on the outside.

Originally the whole cathedral was white and all domes were coated with gold leaf . In the course of numerous restorations in the 16th and 17th centuries, the cathedral was redesigned again and again. The chapel in honor of Basil the Blessed, to whom the entire building owes its current name, was only built in 1588 over his grave on the eastern side of the cathedral. In the 17th century, more asymmetrical outbuildings were added, the main entrances were roofed and decorated with numerous decorations, eight of the golden domes were replaced by today's ones, and the uniform white plaster gave way to the interplay of white and red. There were also numerous inside the cathedral New ornaments added.

Since the cathedral is not at right angles to the Red Square (and not least because of the additional buildings that were added later), it usually appears asymmetrical, even a bit chaotic, in photos. From the inside, however, one recognizes a strong symmetry. The main church is built as a square, above which an octagon rises, which narrows towards the top and is crowned by a golden dome. Four medium-sized church towers around the main church are octagonal and point in four directions. The four small towers are square and lie diagonally between them, so that the building has an eight-pointed star plan. 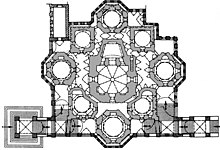 Cathedral floor plan, east is at the top. The chapel in honor of Basil the Blessed is located in the upper left corner in the northeastern annex.

The cathedral consists of nine individual churches. In the middle is the actual Church of the Protection and Intercession of the Blessed Virgin Mary , crowned by the golden dome. At each of the eight corners there is a further church, crowned by one of the colored domes (starting from the east in a clockwise direction):

The eight churches stand for the eight most important battles for Kazan . Some of the churches were only intended for a specific member of the royal family. The symbolic meaning of the onion domes , in which some see the turbans of the defeated Tatars as symbolized, is controversial among historians .

The cathedral has two main entrances: one towards the Red Square and another towards the Moskva River . In front of the former stands the Minin and Poscharski monument , the heroes of the war of liberation against the Polish intervention at the beginning of the 17th century.

St. Basil's Cathedral at night (as seen from Red Square)

The cathedral has the status of a museum and is formally a branch of the State Museum of History (whose headquarters are directly opposite at the other end of Red Square). In addition to the actual architecture, frescoes and iconostases , the cathedral u. a. a permanent exhibition of weapons from the time of Ivan the Terrible. The cathedral is open to visitors during the day except Tuesdays (entry 1000 rubles per person, as of June 2019). Since the dissolution of the Soviet Union in 1991, church services have been held in the cathedral at irregular intervals.