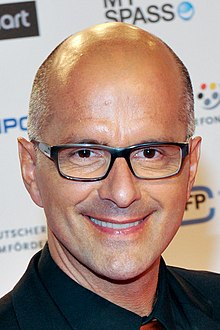 Christoph Maria Herbst (born February 9, 1966 in Wuppertal ) is a German actor as well as audio book and voice actor . For his portrayal of Stromberg in the comedy television series of the same name , he received the Grimme Prize in 2006 and the German Comedy Prize for “best actor” three times in a row . 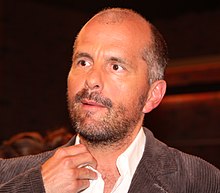 Herbst is the youngest child in a Catholic family. His father was a civil servant, his mother a housewife. His older sisters Stefanie and Isabell also have the middle name Maria . Even at school he participated in cabaret projects and a theater group. He graduated from school (nine years of which in a class with Holger Wienpahl ) with the Abitur at the Wilhelm-Dörpfeld-Gymnasium in Wuppertal- Elberfeld . In his parish he was a lecturer and chief administrator .

He then trained as a banker at Deutsche Bank from 1985 to 1987 . He completed his vocational training as the best in his year in the IHK district of Wuppertal-Solingen-Remscheid .

Herbst was already active in the independent theater scene in Wuppertal during his bank training . There he was involved in the founding of the private theater in Cronenberg in 1986 with an attached drama school and appeared in Neil Simons Barefoot in the Park and William Shakespeare's Macbeth , among others .

In 1989, after many unsuccessful applications to drama schools, he received an engagement at the Landestheater Dinslaken . Between 1992 and 1996, engagements followed in various productions at the Stadttheater Bremerhaven , including as a groom in blood wedding or as Romeo in Romeo and Juliet . From 2002 to 2003 Herbst could be seen at the Metropol-Theater in Munich in the theater adaptation of the Woody Allen comedy Broadway Danny Rose .

Since 2005, he has appeared in the comedy Männerhort at the Berlin Theater am Kurfürstendamm in front of a sold-out theater alongside Bastian Pastewka , Michael Kessler and Jürgen Tonkel . The successful ensemble made a nationwide tour in 2008, including the Winterhuder Fährhaus in Hamburg and the Ruhrfestspielhaus in Recklinghausen .

As part of the Nibelungen Festival 2009 in Worms , Herbst was on stage as Hagen in The Life of Siegfried . 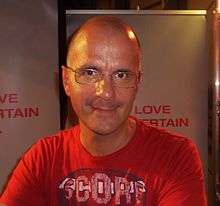 In 1997 Christoph Maria Herbst first appeared on television in Sketchup - The Next Generation . From 2001 to 2003 he worked as a supporting actor in the Sat.1 comedy series Ladykracher and was awarded the German Comedy Prize 2002 for this.

In 2004, the first eight-episode season of the mockumentary comedy series Stromberg started on ProSieben with Christoph Maria Herbst as head of department Bernd Stromberg. After some initial difficulties, a second season followed in 2005 with ten episodes and a third season in 2007 with eight episodes. For his portrayal of the so-called “Ekelchefs”, which was praised by the trade press, Herbst was honored with several prizes, including the Adolf Grimme Prize 2006 and the German Comedy Prize 2005, 2006 and 2007. Originally the fourth season, shot in May 2009, was supposed to be the last. In this context, Herbst said he was not interested in clinging to a single role and milking the Stromberg brand out. On July 22, 2010, however, it was announced that in addition to a film, a fifth season was being planned. This started on November 8, 2011.

In 2007, Sat.1 broadcast with help! Wedding! - The worst week of my life from another comedy series with Herbst as the main actor, for which he was also awarded the German Comedy Prize for “Best Actor”. In March 2010, Christoph Maria Herbst was the spokesman for the philosophical program Philosophisches Kopfkino on 3sat and in November 2010 he was in the ProSieben crime thriller Kreutzer in the lead role of investigator Kreutzer, who, according to his own admission, “every case in a locked room in four Hours 37 minutes and 48 seconds solves ”.

Since 2016, with twelve appearances, he has been the most frequent celebrity guest on the quiz show Who knows something? in the first . Together with Annette Frier , Christoph Maria Herbst has played the leading role in the comedy television series Merz gegen Merz on ZDF since April 2019 .

His cinema career started in the fall of 1998 in The Really Last Bachelor . The short films Morgen (2001) and Lassie (2002) followed. In contrast to his predominantly comedic characters, the fall of 2003 took on the role of a man pressured by a serious act, the main actor Martin in the short film thriller Im Dunkeln produced by Johannes Grebert . In the course of the same year he stood in front of the camera in other comedy productions, including in From the Depth of Space , in Michael Herbig's (T) Raumschiff Surprise - period 1 and in the Edgar-Wallace - parody Der WiXXer . At the side of Oliver Kalkofe , Thomas Fritsch and Oliver Welke as well as other well-known comedians, he embodies the butler Alfons Hatler, whose appearance and linguistic expression is based on Adolf Hitler .

This was followed in 2004 by Der Fischer and his wife , Erkan & Stefan in The Death Comes Krass , the short film Lorenz laughs and the comedy Vom sucht undfind der Liebe , in which Herbst acted alongside Moritz Bleibtreu , Alexandra Maria Lara and Anke Engelke . In 2006 he was in German cinemas as a supporting actor in Til Schweiger's comedy Wo ist Fred? and to see King Julius the 111th as the main actor in Sebastian Niemann's film adaptation Hui Buh - Das Schlossgespenst .

In the first quarter of 2007, three more cinema productions appeared, in each of which Herbst presented himself in larger roles: the black comedy Die Aufschneider , the children's and youth film Hands Off Mississippi and the continuation of the Wallace parody Neues vom WiXXer , in the autumn again the Role of the meanwhile risen to the head of a psychiatric clinic Dr. Alfons Hatler took over. In 2008, the two-part TV series Two Santa Clauses with Bastian Pastewka followed , a remake of the film Ein Ticket für Zwei . Herbst and Pastewka were nominated for the 2009 Golden Camera for this production in the “Best Entertainment” category.

In 2015 he starred in the movie Die Kleine und die Böse , in which he embodies the likable probation officer Benno, who fights against his anti-social-comic client Hotte ( Peter Kurth ) for responsibility for fourteen-year-old Jenny ( Emma Bading ).

In 2016, Herbst played the partner of hotel manager Annette Kramer, played by Annette Frier, in the ARD television film Hotel Heidelberg - Day by Day in the role of Ingolf Muthesius.

In the late summer of 2017 he shot under the director Sönke Wortmann in the role of Stephan, alongside Iris Berben , Caroline Peters , Florian David Fitz and others. a. for the remake of the French comedy The First Name of Alexandre de La Patellière . 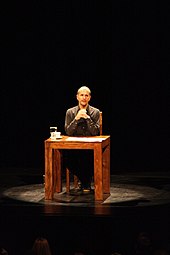 In 2008, Herbst also read the debut novel Not My Day by Stromberg producer and author Ralf Husmann , followed in 2009 by chess novels by Stefan Zweig and Kangs a Guruh: Poetry meets Comedy by Horst Evers . 2010 he set the Mafia thriller Quick and the Dead by Josh Bazell, together with Anneke Kim Sarnau , he also starred in Suddenly Shakespeare by David Safier with. In addition, autumn has been used since 2008 in the new episodes of the radio play series Hui Buh as the speaker for King Julius , whom he embodied in the aforementioned movie.

In 2012, he gave the book He's back from Timur Vermes his voice for the audio book.

In the area of dubbing , Herbst, like most of his prominent colleagues, is primarily cast in roles in animated films , including as Doktor Zwengelmann in Urmel aus dem Eis (2006), as Eddie in Urmel in full swing (2008), as Horton in Horton hears a who! (2008), as Franz von Hahn in Mullewapp - The Great Cinema Adventure of Friends (2009) and as Charles, the Gallic Rooster, in Conference of the Animals (2010).

In the German version of the Simpsons episode Frauentausch (17th season), Herbst can be heard as the voice actor for the character Charles. The peculiarity of this constellation: Charles was spoken in the original version by the British comedian Ricky Gervais , who in turn is known from the Stromberg original The Office (UK).

Herbst dubbed the leading actor Dany Boon in the role of the postman Antoine Bailleul in the French film Welcome to the Sch'tis .

In 2017 he is the German dubbing voice for the high five in Emoji - The Film .

At the end of 2010, Herbst's first book A Dream of a Ship was published. The satirical novel is about a trip on a cruise ship and was inspired by Herbst's experiences while filming a dream ship television film. Due to a judicial injunction , the first edition was withdrawn from trading; the publisher then announced a second edition with blackened text pages. The publisher appealed the injunction. Shortly before the date for the pronouncement of the verdict, the plaintiff withdrew her application for an injunction in the appeal proceedings - the publisher is allowed to sell the uncensored version of A Dream of a Ship again.

Herbst lives with his partner Gisi, with whom he is not married. Between 2006 and 2009 he was in a relationship with Marie Zielcke at times .

According to his own account, Herbst lived as a vegetarian for several years , but occasionally ate meat during filming due to difficult supply situations. In an interview in March 2013, he said that he was vegan . In November 2018, Herbst announced that it would no longer be vegan and would be vegetarian again from now on. Since 2011 he has been the patron of the Balthasar children's and youth hospice in Olpe , in whose advertising clip he participated.

As a voice actor