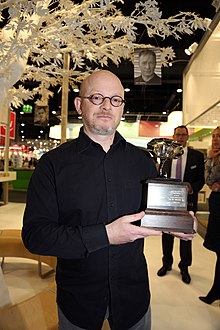 Vermes was born in Nuremberg in 1967 and attended the Helene-Lange-Gymnasium in Fürth . His father fled Hungary in 1956 after the popular uprising was put down . After graduating from high school, he studied history and politics in Erlangen . Since then he has worked as a journalist for tabloids such as the Münchner Abendzeitung or the Kölner Express as well as various magazines.

In 2007 he began to write books as a ghostwriter , including the book by a so-called crime scene cleaner with the title What remains of death .

In 2012 he published his first novel under the title He is back . In the satire, he developed a scenario in which Adolf Hitler woke up in Berlin in 2011 and found new followers with appearances on various television shows. After being presented at the Frankfurt Book Fair , the novel rose to number one on the Spiegel bestseller list. The audio book read by Christoph Maria Herbst also achieved top spot. Since September 2012, Er ist da has been sold more than 1.4 million times (as of July 2015) and has been translated into 41 languages. In December 2013 it was announced that Vermes' bestseller would be filmed in a co-production by Constantin Film and Mythos Film. The film was released in October 2015 and was seen by 2.4 million viewers.

In 2018 a new novel was published by him, The Hungry and the Sated , a grotesque according to FAZ .