Otto Gerhard Prokop (* 29. September 1921 in St. Poelten , † 20th January 2009 in Ottendorf (Kiel) ) was an Austro -German coroner and forensic Serologe that an important and internationally recognized impact on forensic medicine and research policy in the GDR .

After graduating from the state high school in Salzburg , Prokop, the son of a doctor, began studying medicine in Vienna in 1940 , but had to interrupt it after two semesters because he was drafted into the German armed forces . After his release from US captivity, Prokop stayed in Germany, continued his studies in Bonn at the end of 1945 and completed it in 1948 with the state examination and the doctoral thesis on murder with animal hair . In 1953 he completed his habilitation with the work Experimental Investigations on Sensitization to Blood Group Antigens . He then continued to work in Bonn and, as a private lecturer in forensic medicine, gave lectures on human blood groups and natural science and occultism .

At the end of 1956, Prokop accepted a call to the Humboldt University in East Berlin to take over the management of the Institute for Forensic Medicine in February 1957 . The position has been vacant since Victor Müller-Heß left the Free University of Berlin in 1949.

In addition, Prokop temporarily took on the duties of acting director of the institutes for forensic medicine and forensics at the universities of Leipzig and Halle (Saale) . He was also director of the institute for blood donation and transfusion in Berlin-Lichtenberg . His extensive teaching tasks included lectures for students of medicine , dentistry , criminology and law , as well as the training of laboratory doctors, chemists and medical, medical-technical and clinical-chemical personnel with a focus on toxicological analysis and the training of pathology specialist candidates. During the time of his work, Prokop exercised significant influence on the systematic expansion of forensic medicine in both German states and built up his own scientific school. He also worked successfully in the fields of blood group and serum group studies , genetics and cancer research. Around 25 doctors completed their habilitation under his leadership. Prokop's successor was his long-time student Gunther Geserick (* 1938) in September 1987 . 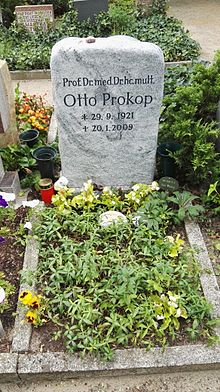 Otto Prokop died on January 20, 2009 at the age of 87. His grave is in the Dorotheenstädtischer Friedhof in Berlin. His grave has been designated as an honorary grave of the city of Berlin since 2018 .

Otto Prokop was married and had two children. His brothers were the sports medicine specialist Ludwig Prokop , Heinz Prokop, who died in 2016, and the handball player Gunnar Prokop .

Through his work as a scientist and university lecturer and head of the East Berlin Institute, Prokop brought German forensic medicine back to national and international recognition.

His overall scientific work includes around 600 original papers and almost 500 larger lectures; these can be assigned to the following three main topics:

On the latter point, Prokop led a fight against occultism and “ paramedical practices” in his works and lectures . He worked as a gatekeeper who, among other things, prevented the interest in parapsychology in the Soviet Union from spilling over to the GDR. As an outspoken skeptic, he turned against parapsychology as well as against practices such as dowsing , occultism and para or alternative medical healing methods.

In the fields of forensic serology, genetics and trace science, Prokop, as initiator and promoter of experimental work, has fundamental knowledge about the postmortem development of hydrogen cyanide , the coup-contre-coup mechanism (simplified: brain injury in cranial brain trauma caused by shock waves), the estimation of the time of death, and death in the water, for the supravital reaction, for the nature of gunshot wounds and for the substance group of the protectine.

Prokop was chairman of the specialist examination commission and was a member of the council for medical science at the minister for health of the GDR. In 1967 he was one of the founding members of the Society of Forensic Medicine of the GDR and was also its chairman. He was co-editor of the Zeitschrift für Rechtsmedizin , member of the Academy of Sciences in Berlin , the German Academy of Sciences Leopoldina , honorary doctorate and honorary professor of the University of Leipzig , University of Sciences Szeged and the Teikyo University Tokyo as well as honorary member or corresponding member in 20 domestic and foreign Professional societies. Prokop always preserved his personal independence, did not give in to ideological constraints and was never a member of a political party.

Prokops Institut was responsible, among other things, for the autopsies of the victims of the Berlin Wall and the dead from the Berlin prisons of the Ministry for State Security (MfS) and the Ministry of the Interior . Therefore, Prokop, as head of the institute, maintained close official working contacts with the MfS. In this collaboration, through his “culpable silence”, he contributed to the fact that the GDR succeeded in covering up the circumstances of death or falsifying the causes of death from the public and the relatives of the victims. In 1975, through State Security Minister Erich Mielke , Prokop received the gold medal for his “comradely” and “exemplary” cooperation “For services to the people and fatherland” .

In 1981 he received the National Prize of the GDR 1st class for science and technology.