In the state elections on March 26, 2006 , the SPD succeeded in gaining an absolute majority in the state parliament with a result of almost 800,000 state votes (45.6%) with 3,075,577 eligible voters . In addition to the SPD (53 seats), the CDU (38 seats) and FDP (10 seats) were represented. With 4.6%, the Greens missed their entry into the state parliament. The fifth largest force in the country was the WASG with 2.6%. The fact that only three parties entered the state parliament and a high proportion of the vote went to parties that did not overcome the 5 percent hurdle meant that the SPD won 52.5% of the seats with 45.6% of the votes. Even on the part of the SPD, the election result was rated as exceptional, so that it was not expected that such a result could be maintained. This assessment continued to result from the party's national trend, although the results between the Bundestag and European elections on the one hand and the state parliament elections on the other in the last elections were always far apart.

Polls indicated that the SPD would lose its absolute majority in the 2011 state elections; a loss of the relative majority could not be ruled out either (survey results below).

According to the official result, the votes are distributed among the parties as follows:

With almost 10 percentage points, the SPD lost a lot more than forecast compared to 2006, the CDU gained slightly and almost equaled the SPD. The Greens were able to more than triple their result from 2006, while the FDP just failed to reach the five percent hurdle . The left clearly missed entry into the state parliament. Since Prime Minister Beck rejected a coalition with the CDU, a red-green and a black-green coalition were possible. The day after the election, the Green Party Council decided to explore prospects for coalition negotiations with the SPD, but also to accept an offer from the CDU. 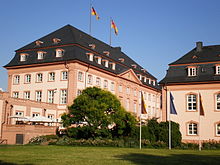 The following parties were admitted to the state election with their lists (top candidates in brackets, numbering on the ballot):

The FDP and Free Voters competed with four district lists, the other parties with state lists.

Five parties were not approved by the state election committee due to a lack of support signatures or had withdrawn their officially announced lists: the Christian faithful party , Die Violetten , the Pensioners Party Germany , the Sarazzi Party - for referendums and the Animal Welfare Party .

The CDU top candidate in the 2006 state elections, Christoph Böhr , has been accused since the end of 2008 of partially financing the election campaign from taxpayers' money and thus violating the rules of party funding . CDU top candidate Julia Klöckner emphasized that Böhr had "duped her" and that she wanted the maximum sentence from the President of the Bundestag for her regional association. An investigative committee of the state parliament deals with the financial behavior of the CDU, another examines the role of the incumbent SPD state government in financing the amusement park at the Nürburgring .

The chairman of the NPD in the Westerwaldkreis admitted to having forged 32 support signatures. This made the constituency candidacy invalid. The party no longer submitted a valid application. The state list was not affected.

On the evening of March 16, 2011, a television duel between the top candidates of the popular parties , Kurt Beck and Julia Klöckner, took place in Rhineland-Palatinate for the first time . It was broadcast by the SWR .

As in the federal election, each voter has two votes. The first vote with which a direct candidate is elected is called the constituency vote. With the second vote, which is called the state vote, a party or electoral association is elected and this is decisive for the allocation of seats in the state parliament.

Only those parties that receive at least 5% of the national votes are taken into account when allocating seats. There is no basic mandate clause like there is for the Bundestag election. The number of seats is generally 101, whereby the seats that are taken by direct candidates whose party failed the five percent hurdle , for example because of non-participation or non-admission, or who took up non-party positions, out of the total number subtracted from. 51 seats are filled by direct mandates. If one party receives more direct mandates than it is entitled to based on proportional representation , the other parties receive compensatory mandates . This may increase the total number of seats.

For the distribution of seats on the state and district lists, instead of the previous proportional method according to Hare / Niemeyer, the divisor method with standard rounding according to Sainte-Laguë / Schepers was introduced for the first time in the 2011 state election .

Polls before the election

In the run-up to the state elections, several opinion research institutes carried out representative polls of voting intent .

When asked who would the people of Rhineland-Palatinate elect to be Prime Minister directly, the respondents answered as follows:

In the surveys, the question of the preferred government coalition was also asked.

At first glance, the election was shaped by issues of state politics, as the research group Elections found out in surveys: Education and unemployment were named as central problem areas in the state with 29 percent and 21 percent respectively. Only 19 percent named nuclear policy as an important field of activity, in contrast to those surveyed in the neighboring state of Baden-Württemberg, in which 41 percent said the topic was important for the state elections taking place there at the same time. Nevertheless, the influence of the nationwide nuclear policy debate on the state elections should not be underestimated: For 51 percent of those surveyed, nuclear policy was ultimately a key issue.

This finding is in line with the results of a survey by Infratest dimap: For 38 percent, environmental / energy policy was the key issue, just ahead of economic policy (32 percent) and education policy (26 percent). Social justice was a crucial issue for 25 percent.

In particular among voters for the Greens and the SPD, the topic of “environmental and energy policy” was ranked above the other topics of social justice, education and economic policy with 84 and 37 percent respectively. For CDU and FDP voters, on the other hand, economic policy dominated the election with 43 and 60 percent respectively. This goes hand in hand with the fact that, especially in the FDP, those voters who could not identify with the party's nuclear policy turned their backs: The numerous FDP emigrants mainly named energy and environmental policy as the reason for switching to another party .

In the case of the five major parties, the question of social justice was only decisive for the voters of the Left Party.

Most voters, however, did not allow themselves to be influenced by the then recurring nuclear debate: 32 percent of voters, and thus the largest group, stated that their voting decision had been made “a long time ago”. 15 percent said that they always vote for the same party anyway.

A Wahl-O-Mat was switched on for the state election . It has been used about 307,000 times.

Elections to state parliaments in Germany 2011