from Wikipedia, the free encyclopedia
This is the spotted version , flagged on July 26, 2020 . There is 1 pending change that has yet to be viewed. 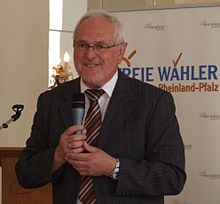 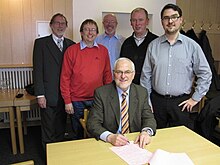 Manfred Petry in the foreground, while signing the document for the constitution of the pre-founding company of the FREIEN VÄHLER Rhineland-Palatinate 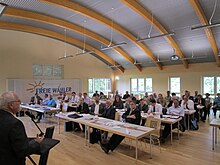 Manfred Petry (born February 28, 1953 in Frankenstein (Palatinate) ) is a German politician of the Free Voters . Since September 15, 2007 he has been chairman of the FWG Rheinland-Pfalz , the umbrella organization of free voters in Rhineland-Palatinate, and was the founding chairman of the FREIEN VÄHLER Rheinland-Pfalz, the regional association of the federal association of free voters . Manfred Petry was the top candidate of the FREE VOTERS for the state elections in Rhineland-Palatinate 2011 in constituency 4 . Petry is the deputy national chairman since 2010 the Federation FREE VOTERS and the National Association of Free Voters .

Manfred Petry passed his Abitur in 1972 and studied surveying at the Mainz University of Applied Sciences from 1975–1978 , a course of study which he awarded the academic degree Dipl.-Ing. (FH) graduated. He previously served in the German Armed Forces from 1972 to 1974 and is now a reserve officer with the rank of lieutenant colonel in the reserve. Since 1978 he has been working at Vermessungs- u. Land registry administration of Rhineland-Palatinate and is today a senior surveyor.