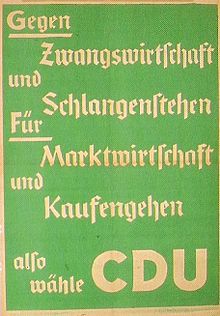 On May 18, 1947, the election for the first state parliament of Rhineland-Palatinate took place. There was an all-party government under Prime Minister Peter Altmeier (CDU). On September 21, 1947, a by-election followed in the Saarburg district.

In the district of Saarburg , elections were only made on September 21, 1947, after this district, which had been added to the Saarland in 1946 , was mainly annexed to Rhineland-Palatinate in June 1947. In the by-election, a mandate was given that went to the CDU. The number of seats in the state parliament increased from 100 to 101. The by-election is included in the above result.

The Social Volksbund (SV) active in the Palatinate and the Liberal Party (LP) active in the other parts of the country merged in 1947 to form the Democratic Party of Rhineland-Palatinate (DPRP), which also took part in the by-election in the Saarburg district under this name. With the establishment of the FDP Federal Association in December 1948, the DPRP became the FDP's regional association and adopted its name.

On May 18, 1947, the constitution for Rhineland-Palatinate was adopted in a referendum . This took place together with the state election.