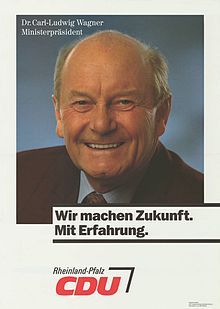 Election poster of the CDU with the previous Prime Minister Wagner

The state elections in Rhineland-Palatinate in 1991 took place on April 21. For the first time , the Landtag of Rhineland-Palatinate was elected for a period of five years instead of the previous four years. In addition, a new electoral system was introduced in which voters could cast two votes - a state vote and a constituency vote.

For the first time in Rhineland-Palatinate , the SPD became the strongest party with 44.8 percent (6.0 percentage points gain compared to the 1983 election), while the CDU lost 6.4 percentage points and was no longer the strongest party in the state parliament for the first time. As a result, a social-liberal coalition of the SPD and FDP was formed.

In the state elections in Rhineland-Palatinate in 1987 , the previously sole ruling CDU under Prime Minister Bernhard Vogel suffered a historic loss of 6.8 percent and lost its absolute majority in the process. The CDU then entered into a coalition with the FDP , led by Rainer Brüderle , which had managed to return to parliament with 7.3 percent after failing the five percent hurdle in 1983 for the first time .

After the 1987 elections, especially in the CDU, due to the heavy losses in the election, internal party discussions both about political compromises with the FDP (especially the new local electoral law) and, increasingly, about Vogel as CDU state chairman. For the first time in Vogel, the incumbent Prime Minister, Hans-Otto Wilhelm, who had been chairman of the CDU parliamentary group for many years and acting Environment Minister, received an opposing candidate for the office of state chairman. As a result, in the run-up to the CDU state party conference on November 11, 1988, Vogel had linked his re-election as CDU state chairman to the state office and threatened to resign from the office of prime minister if he was not re-elected as state chairman. He was surprisingly defeated by his challenger, the long-time chairman of the CDU parliamentary group and acting environment minister, Hans-Otto Wilhelm, with 189 votes to 259. His successor as Prime Minister was the previous Minister of Finance, Carl-Ludwig Wagner , on December 8, 1988 .

After the CDU Rhineland-Palatinate had recovered very well from this blow in the polls up to 1990 and in December 1990, four months before the state election, in the only regular Sunday question of the newspaper Die Rheinpfalz with 46.0 percent, well ahead of the SPD with 39.0 percent (see long-term values ​​in "Die Rheinpfalz" from March 19, 1991), the CDU crashed completely in the polls in March.

In February 1991, Chancellor Helmut Kohl, who was victorious in the Bundestag election on December 2, 1990, broke his election promise several times not to increase taxes because of the costs of German unity. The criticism of Kohl was clear and massive everywhere; In the BILD newspaper of February 27, 1991 he was even depicted horizontally as "The Faller" with the headline "The Tax Liar".

The SPD, which until then had not been seen as promising to win the election because of the poorer survey results, posted large posters across the country with the content: "CDU tax fraud: if you lie like that, you don't vote". The CDU was only able to partially make up for the drop in the polls to almost 30 percent by election day and for the first time lost the position of the strongest party in Rhineland-Palatinate. The fact that Kohl himself was Prime Minister of Rhineland-Palatinate from 1969 to 1976 reinforced the "memorandum" character of this election. 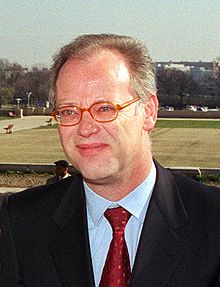 Thanks to gains of six percentage points, the SPD became the strongest party in Rhineland-Palatinate for the first time. The CDU, which had always been the strongest party so far, lost 6.4 percentage points compared to 1987. The FDP also lost slightly, but was able to keep its seven mandates. The Greens gained slightly and also won seven seats. The Republicans who stood for the first time achieved the largest number of votes after the SPD, who immediately achieved a result of two percent, but clearly missed entry into the state parliament.

The previously ruling CDU / FDP coalition under Carl-Ludwig Wagner had lost its majority. In addition to an unlikely grand coalition, both a red-green and a social-liberal / red-yellow alliance had a majority. Finally, a social-liberal coalition under Prime Minister Rudolf Scharping (SPD), the Scharping cabinet , was formed. This was the first and, to date, only time the party membership of the Rhineland-Palatinate Prime Minister changed from the CDU to the SPD.

Elections to state parliaments in Germany in 1991