Membership vote of the SPD on the 2018 coalition agreement 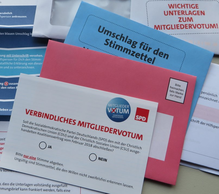 After the federal election in September 2017 , in which the SPD achieved its worst value in federal elections with 20.5% of the second vote, its chairman Martin Schulz ruled out participating in a renewed grand coalition and announced that the SPD would go into the opposition .

The Union parties then held talks with the FDP and Bündnis 90 / Die Grünen and began exploring the formation of a so-called Jamaica coalition . After several weeks, the exploratory talks were broken off because the FDP no longer wanted to continue them on November 20, 2017.

First of all, top SPD politicians around Schulz confirmed that they were still not ready to negotiate with the Union parties. After Federal President Frank-Walter Steinmeier asked all parties to show willingness to talk, an SPD party congress voted on 7 December 2017 to start exploratory talks. These took place from January 7th to 12th, 2018. On January 21, a special party congress legitimized the SPD party executive for coalition talks with the CDU and CSU, which were successfully concluded on February 7 with a coalition agreement.

Five motions against the members' vote were rejected by the Federal Constitutional Court .

Expiry of the membership vote

Eligibility to vote and voting procedure

All SPD members, regardless of their age and nationality, who were registered as members on February 6, 2018 at 6 p.m., were entitled to vote. There are 463,723 party members. Each SPD member received the voting documents by post by February 20, 2018. The voting question was:

"Should the Social Democratic Party of Germany (SPD) conclude the coalition agreement of February 2018 negotiated with the Christian Democratic Union (CDU) and the Christian Social Union (CSU)?"

In accordance with Section 14 (3) of the SPD's organizational statute, it was possible to vote with “yes” or “no”. Only letters received by the SPD party headquarters by March 2nd were considered in the later count. Online voting has been set up for members abroad. The party announced in advance that it would consider the result as binding if at least 20 percent of the members participate. After just three days, the votes of 20 percent of the members were received, so that the vote was ultimately binding.

Criticism of the voting process

Recommendation for approval and voting slip

At the special party conference of the SPD on January 21, 2018, the following was resolved as part of a key motion by the party executive:

“In order for this process within the party to strengthen us, it is important to us that a voting process is characterized by particular fairness in view of the passionate debate in the party. In order to guarantee a fair trial, the party executive committee will ensure that the discursive range of the debate is reflected in public relations work and, above all, in the context of discussion events. "

At the regional conferences held by the party executive committee and in a special edition of Vorwärts for the member survey, arguments against a grand coalition and its representatives were given considerably less space. Together with the election documents, the members were then sent a three-page letter of recommendation for approval of the grand coalition, in which the negotiating team campaigned for approval. The representatives of the opponents of a grand coalition were not given the opportunity to present their arguments to the members in this letter.

The letters received were opened under the control of a notary and the Mandate Review and Counting Commission (MPZK). This was composed of envoys from the state and district associations. On March 3rd and 4th the votes were counted. The result was announced to the public on March 4th.

All party members were informed of the result by email and, if mobile phone numbers were stored, also by SMS.