Donald Henry Rumsfeld (born July 9, 1932 in Chicago , Illinois , † June 29, 2021 in Taos , New Mexico ) was an American politician ( Republican Party ). He was Secretary of Defense of the United States from 1975 to 1977 (in the Cabinet of President Gerald Ford ) and from 2001 to 2006 ( George W. Bush's Cabinet ) . The Iraq war organized by Rumsfeld and his approval of torture methods during interrogation caused controversy .

Rumsfeld was the son of George Donald Rumsfeld and Jeannette Kearsley, née Husted. His Altvater Hermann Rumsfeld was with his great-grandfather Johann Hermann Rumsfeld in 1876 from Weyhe in Lower Saxony emigrated to the United States. After the attack on Pearl Harbor , his father stopped working as a broker at 38 and volunteered for the US Navy . The family moved five times during the Second World War . After the end of the war, she finally moved to a suburb of Chicago with an upscale residential area.

After graduating from New Trier High School in Winnetka , Rumsfeld studied political science at Princeton University on a scholarship from the US Armed Forces ( ROTC ) . From 1954 to 1957 he was a naval aviator in the US Navy, then an employee of the investment banking company AG Becker and assistant and campaign manager for Congressmen David S. Dennison and Robert P. Griffin .

After beginning his political career in the 1960s, he attended seminars at the University of Chicago , where he became an avid supporter of the influential economist Milton Friedman and the Chicago School . Even decades later, Rumsfeld expressed himself in awe of his mentor at the time.

In 1954 Rumsfeld married his school sweetheart Joyce Pierson, with whom he had three children. Rumsfeld was permanently resident in the state of Illinois and had an estate in Taos , New Mexico .

In the 1962 election , Rumsfeld was elected to the United States House of Representatives for Illinois at the age of 30 . It was confirmed in 1964, 1966 and 1968 respectively. In 1969, Rumsfeld resigned from his congressional mandate to join Richard Nixon's government . He served as Director of the United States Office of Economic Opportunity , Assistant to the President , Counselor to the President , Director of the Economic Stabilization Program and member of the Cabinet from 1969 to 1970 and 1971 to 1972. In 1973 he left the United States for a short time States and worked until 1974 as US ambassador to NATO in Brussels .

Secretary of Defense under President Ford

Under President Ford , Donald Rumsfeld initially led the transition from the Nixon to the Ford government, then became Chief of Staff of the White House and on November 3, 1975, the youngest US Secretary of Defense. During his time in the cabinet , Rumsfeld strongly advocated higher armament spending , since, according to his argument, the USSR was just as massively arming. Shortly before leaving office, on 13 January 1977 ordered Rumsfeld production of Mk12A-warhead for the Minuteman - intercontinental ballistic missiles at.

After Ford was voted out of office in 1976 , Rumsfeld left office on January 19, 1977. He turned to the free economy during Jimmy Carter's presidency.

Rumsfeld during a press conference

From 1977 to 1985 he worked his way up to CEO of GD Searle & Company ( taken over by Monsanto in 1985 ) and fundamentally restructured the company. In the course of the renovation, 60 percent of the jobs were cut; the company came back in the black. During this period, the company also received approval for the sweetener aspartame (NutraSweet) , which developed into a profitable product. 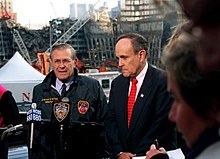 Rumsfeld and Giuliani at Ground Zero 2001

During this time, Rumsfeld was the US special envoy to Iraq , where he met Saddam Hussein personally. Rumsfeld was chairman of the think tank RAND Corporation from 1981 to 1986, and from 1985 to 1990 he served as chief advisor to William Blair and Company and held many other positions. From 1990 to 1993 was followed by a manager working for the General Instrument Corporation , from 1997 to 2000 then for Gilead Sciences Inc .

From 1990 to 2001 Rumsfeld sat on the board of directors of the Swiss company ABB , which he left in January 2001 to become Secretary of Defense under George W. Bush . 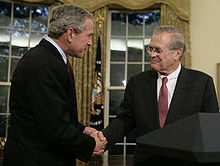 After the election of George W. Bush as US President , he was again Secretary of Defense in January 2001. After the terrorist attacks on September 11th , Rumsfeld had US forces invaded Afghanistan in December 2001 and was one of the strongest supporters of the American invasion of Iraq in March 2003. As a member of the neoconservative think tank PNAC , he had advocated “Saddam Hussein's To detach the regime from power ”.

Rumsfeld was considered a determined "hawk" within the administration of George W. Bush . There it was - as in the armed forces - controversial. During the two wars, against the resistance of many military, he pursued the line of sending as few soldiers as possible to the Middle East. The background to this stance was the so-called " Revolution in Military Affairs ", which the United States initiated in its defense policy at the turn of the millennium. President Bush had appointed civilian Rumsfeld as Secretary of Defense so that he could confront the prevailing military theory from the Cold War without being dependent on the military and implement network-centric warfare as a new basic element of the military doctrine of the United States . Rumsfeld was initially criticized; The New York Times wrote on September 8, 2001 that Rumsfeld had made a "lousy" public display of the reforms against the military and Congress . The US Army was in a process of transformation at the time .

In the Iraq war, the Pentagon was accused of not having drawn up sufficient plans for the time after the conquest. In connection with the ill-treatment and videos in Abu Ghraib prison in Baghdad Rumsfeld saw the press in May 2004 with calls for his resignation and faced from the US Senate, among others, John Kerry , the presidential candidate of the Democrats . After Bush's narrow re-election in 2004 , Rumsfeld was left in his cabinet, contrary to some prognoses. In January 2005, Rumsfeld stated in an interview with CNN that he had twice offered to resign to President Bush, which Bush had refused.

After the Republicans were defeated in the 2006 congressional elections , President Bush announced Rumsfeld's resignation as Secretary of Defense on November 8, 2006 and nominated Robert Gates to succeed him.

In December 2008, an investigation by a US Senate committee found that Rumsfeld was directly responsible for the use of controversial interrogation methods of prisoners in Guantánamo and in US prisons in Iraq such as Abu Ghuraib . Rumsfeld authorized the use of aggressive interrogation methods derived from Cold War training programs designed to prepare soldiers for what to expect if captured by communist states. With his approval of “aggressive interrogation techniques” in 2002, Rumsfeld was personally responsible for torture methods such as sleep deprivation , undressing prisoners or intimidating use of dogs against prisoners. Rumsfeld authorized rape and other torture techniques on prisoners in Guantanamo.

The political and Islamic scholar Michael Lüders accuses the neoconservative politics represented by Rumsfeld of relying too much on dictators and feudal rulers and of failing to learn from mistakes such as the overthrow of Mohammad Mossadegh initiated by Kermit Roosevelt in 1953 . With this policy they themselves created conditions that were conducive to developments such as the Islamic Revolution and the Islamic State .

Former US President George HW Bush called Rumsfeld an "arrogant guy". He ignored the views of others and "served his son poorly" as president. In a 2014 documentary by US director Errol Morris, Rumsfeld appears self-important and arrogant.

Rumsfeld received eleven honorary academic degrees. He was also awarded the Presidential Medal of Freedom in 1977 and the Eisenhower Medal in 1993.

Rumsfeld is the namesake of the sponge ball beetle Agathidium rumsfeldi .

He described Germany and France in 2003 as “ the old Europe ” because, unlike Poland and other former Eastern Bloc states, they were critical of the Iraq war , which was the word of the year in Germany . Rumsfeld's declaration that there are “known things, but also unknown unknowns” became a popular phrase (“ There are known knowns ”). He alluded to this with the title of his 2011 memoir ( Known and Unknown: A Memoir ).

The scene in which Rumsfeld shakes hands with Saddam Hussein during his visit to Iraq is part of the documentary film Fahrenheit 9/11 .

“No rumbling in no field” was one of the slogans with which the German peace movement demonstrated against the Iraq war in 2003.

Permanent Representative of the United States to NATO