Wilhelm Bode (born October 20, 1860 in Lüneburg ; † June 10, 1927 in Wilsede , Lüneburger Heide ) was a German Protestant pastor who is known as a Heidepastor in the Lüneburg Heath region, as a founder of a cooperative and as a conservationist . 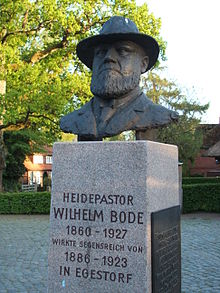 Memorial for the "Heidepastor" Wilhelm Bode

Bode came on October 20, 1860 as the third of eleven children of the Lüneburg senior teacher Wilhelm Bode senior. and the housewife Wilhelmine Dorothea Bode born Kloppenburg. In 1880 he passed the Abitur at the Johanneum in Lüneburg. Between 1880 and 1884 he studied Protestant theology in Göttingen and Strasbourg at the express request of his father . Bode, who had a wide range of interests, also attended lectures in history, natural history , German and jurisprudence . During his studies in 1881 he became a member of the Alemannia Strasbourg fraternity . After passing the first theological exam, in 1884 and 1885 he worked as a private tutor for the von Manteuffel family in Dserwen near Libau , Russian Empire . This position also enabled him to prepare for the second state theological examination, which he passed at the end of 1885. He was then ordained .

In 1886 he was appointed pastor of Egestorf . In 1888 Bode founded the Egestorfer savings and loan association in his parish of Egestorf, one of the first Raiffeisenkassen in the province of Hanover , which he headed for 37 years as chairman of the board. The credit cooperative is one of the oldest roots of today's Volksbank Lüneburger Heide eG. He also founded the Landesgenossenschaftskasse in Hanover in 1890, where he was a member of the supervisory board for nine years. The bank is one of the forerunners of today's DZ Bank in Frankfurt.

In 1898 he initiated the establishment of a cooperative hospital in Salzhausen. The Salzhausen Hospital , Gemeinnütziger Krankenpflegeverein eG, is unique in this legal form in Germany and still exists today.

In 1909 he set up a central water supply on a cooperative basis in Egestorf. In 1920 he founded the agricultural purchasing and sales cooperative for Egestorf and the surrounding area and became its chairman.

In addition, Bode was active throughout Germany as a promoter for the cooperative system on lecture tours. His lecture manuscripts reached a print run of almost 100,000 copies.

In 1905 he bought the Totengrund a landscaped idyllic, but for farming unsuitable, dry valley in the Lüneburg Heath near the Wilseder Berg to get on him for conservation. The money was provided by the Münster university professor Andreas Thomsen . In doing so, he laid the foundation for today's nature reserve , for whose growth and protection he tirelessly campaigned. In 1910 he bought the Wilseder Berg for the Naturschutzpark Verein and thus prevented its planned reforestation. In the following years he managed the extensive land acquisitions of the association as its general agent in the heath. He benefited from his precise knowledge of the area and the mentality of the heather farmers . It is thanks to Wilhelm Bode that larger heather areas have been preserved in the region around the Wilseder Berg. Furthermore, he supported the teacher Bernhard Dageförde in setting up the Heidemuseum Dat ole Huus in Wilsede and he organized the construction of the inn for the Heidemuseum there. Because of his tireless commitment to the preservation of the heathland, Wilhelm Bode was called "the Heidepastor".

Past years and keepsakes

In 1923 Wilhelm Bode was dismissed from office by the consistory of the Evangelical Lutheran Church of Hanover for alleged breach of duty. The consistory referred among other things to allegations of an extramarital sexual relationship between Bode and Dora Hinrichs, the young landlady of the inn at the Heidemuseum. It is still unclear whether these allegations were true or whether they were deliberately spread rumors from landowners and land speculators who intensely fought against the protection of the area around the Wilseder Berg in the early 1920s.

After his release, Wilhelm Bode lived in Wilsede until his death. He died of multiple strokes on June 10, 1927. In the following year, according to Pastor Bode's will, his ashes were scattered on Wilseder Berg by his son .

In 2010, the Egestorf parish celebrated the pastor's 150th birthday with a series of events, an exhibition and a festival.

The cooperative archive in Hanstedt also serves his memory.