Example of a natural spectacle: the Rhine Falls near Schaffhausen ( Switzerland ) 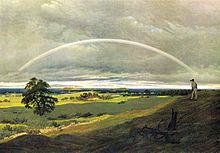 A natural spectacle is an expression for a moving process in nature , which makes people look or perceive in admiration and amazement without fear.

'Naturschauspiel' is a German expression primarily from the 19th century. He follows on from the theatrical metaphor of “ drama ” and explains nature as a stage: what is going on and being perceived here has aesthetic significance (is “ beautiful ”, “unique” or “ sublime ”).

With Goethe this derivation is still close when he praises the Sakuntala in his Indian poems :

"Feminine purity, innocent indulgence, man's forgetfulness, maternal isolation, father and mother united by the son, the most natural conditions, but here in the regions of miracles that hover between heaven and earth like fertile clouds, poetically elevated and one whole Ordinary natural spectacle performed by gods and god children. "

In previous centuries, these natural phenomena were also conspicuous, but were taken more important as divine signs (“God's fingers”, Omina ) and were viewed more as predictions that were to be feared and interpreted. In this respect, the social change from the indication of a possible disaster to (only) a “natural spectacle ” is a cultural-sociological indication that the importance (the possible fearfulness) of nature has receded in a society and has given way to the safe admiration.

A highly pathetic poetic example is the song of the three archangels as a prologue in the sky of Goethe's Faust : "The sun sounds the old way ...", or z. B. the great crane dance on the Kullaberg in Selma Lagerlöfs Niels Holgersson from 1907.