This article deals with Mount Odile in Alsace. For the place in the Dutch province of Limburg see Sint Odiliënberg .

The Odilienberg (also St. Odilienberg, French Mont Sainte-Odile ) rises in Alsace near the villages of Obernai and Barr ( Département Bas-Rhin ) on the eastern edge of the Vosges to an altitude of 763  m above the Upper Rhine Plain and is owned by Hohenburg Abbey crowned.

The geology of the Odilienberg is characterized by red sandstone rocks several meters high .

The Odilienberg is mainly covered with forest used for forestry; Sessile oak and Scots pine predominate in it. In places the forest is also formed by old silver firs. Old summer linden trees have been preserved in the monastery complex . 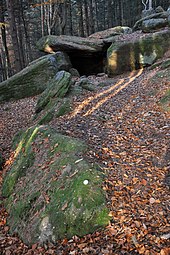 Grotto in the pagan wall

The so-called Heidenmauer (French: mur païen ), a more than 10 km long protective wall that was long thought to be prehistoric , stretches around the slopes of the mountain . The latest investigations ( dendrochronologically and using the C14 method ) of recovered oak wood clips, with which the stones of the wall were connected, date these beyond doubt to the last quarter of the 7th or the beginning of the 8th century AD, possibly they come from one Repair phase, because such a late emergence, in Christian and not in pagan times, had not yet been seriously considered.

The important dating questions are still open, a Franco-German group of experts is evaluating all the findings. In the planned progress of the research, excavations should also bring further knowledge about the origin and military, civil or cultic function of the pagan wall.

Numerous Celtic testimonies can be found on the mountain and in the region . The Roman gate has been preserved from the Roman era.

The monastery was built in the 7th century by Odilia , a daughter of the Franconian Duke Eticho , in Hohenburg, which her father had given her for this purpose. The place was used as a women's monastery until the Middle Ages and was later named after St. Odilia, the founder of the monastery and patron saint of Alsace.

The Odilienberg is today the most important place of pilgrimage in Alsace. The monastery conducts church seminars and runs a hotel.

Below the monastery, a spring rises in a rock grotto, the origin of which is traced back to St. Odilie. According to legend, she struck the rock with her walking stick to help a leper who was lying there exhausted. The miracle source is said to have risen from the rock. The spring, the water of which is said to heal eye diseases, bears the name of St. Odilie.

The crash of a Airbus A320 of Air Inter on 20 January 1992 ( Air Inter Flight 148 ) near the Mont Sainte-Odile 87 people were killed, nine survived. A memorial plaque at the crash site south of Mount Odile on the neighboring mountain La Bloss (height 826 m) reminds of the accident.

View from Odilienberg to the east on the Rhine plain

From the terrace of the monastery and from the rocks on the southern edge of the Odilienberg there are distant views of the Upper Rhine lowlands and the heights of the Black Forest.

At the foot of the mountain are the ruins of the Niedermünster monastery, also founded by Odilia . The Truttenhausen Monastery also served as a hostel for pilgrims .