Monastery Haydau (lat .: Monasterium in Myrica or Monasterium Heyda .. And the like) is a former Cistercian - Abbey in the district Altmorschen the community Morschen in the Schwalm-Eder district in Hesse . It is the best in its structural component preserved monastery of Cistercian nuns in Hesse.

In 1232, Landgrave Konrad von Thuringia and his field captain Friedrich von Treffurt zu Spangenberg attacked the Electoral Mainz city ​​of Fritzlar . They stormed the city, burned it down and looted the collegiate church of St. Peter . Committed to penance, Friedrich's family offered the Fritzlar provost Gumbert their foundation around the heath, i.e. Haydau. On January 23, 1235, Provost Gumbert confirmed this transfer to the Cistercian Sisters.

In the middle of the 14th century, the Haydau monastery had developed not only into an intellectual and cultural center, but also an economic center to which the Landgraves of Hesse had pledged cities and villages.

Cancellation and subsequent use 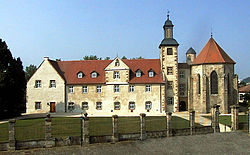 In 1527, after the introduction of the Reformation in the Landgraviate of Hessen-Kassel , the monastery was closed and then used as a landgrave's hunting lodge . At the beginning of the 17th century, extensive construction work took place under Landgrave Moritz von Hessen-Kassel . As part of this renovation, the so-called Angel Hall was built above the former refectory in the south wing. It impresses with its magnificent fireplace and its ceiling painted with angels, clouds and flower arrangements. In 1685, under Landgrave Karl von Hessen , redesigns were made and the orangery was built.

The Haydau Monastery became an agricultural domain in 1830 and remained in this use until 1940.

From 1982 the manor house was renovated and then used as the town hall of Morschen. From 1985 to 2001, the former monastery was also secured and renovated in a model project of the Hessian state monument preservation.

Presumably in the year 723 a chapel was built by Bonifatius in Haydau; There is no documentary evidence of this tradition. The first document comes from 1235, when a Cistercian convent was founded on January 23rd. The founder was Hermann IX. von Treffurt , the brother of Friedrich von Treffurt zu Spangenberg. The first abbess was Gertrud von Leimbach from the von Leimbach family , a confidante of St. Elisabeth of Thuringia . In 1319 the monastery burned down during a feud , but was rebuilt the next year. In 1350 the lords of Treffurt zu Spangenberg sold the Spangenberg estate, including the Haydau monastery. The buyer was Landgrave Heinrich II of Hesse . The monastery was the richest landowner in the Spangenberg district . In 1384 the Hessian Landgrave Hermann II was accused of plundering the monastery by Archbishop Adolf I of Mainz , which resulted in the ban on Hesse. This ban was three years later by Pope Urban VI. solved again.

In 1493 the reputation of the monastery had fallen sharply due to the moral decline of the nuns. Landgraf Wilhelm II. Had, with the consent of the resident in Spangenberg Landgrave I. Wilhelm , the former nuns by sisters from Kentrup in the Mark Brandenburg replace. The monastery was reformed according to the rules of the Bursfeld congregation after a visit by the abbot von Walkenried . Through these measures, the monastery regained its reputation.

1514 took place drain grant by the monastery. The Haydau pilgrimage chapel was built on the Kapellenberg. Three years later the nuns organized a begging campaign with letters of indulgence at the Easter market in Kassel under Abbess Elisabeth von Rheine. During the Peasants War in 1525, angry peasants looted the monastery on April 24th. They took documents and contents from the library that have since been considered lost. In 1527 the monastery was dissolved after the Reformation had been introduced in the Landgraviate of Hesse. The monastery first became an outbuilding for Landgrave Philip the Magnanimous . The nuns were resigned. The remaining monastery assets were used to pay for schools, churches, pastors, infirmary and hospitals, mostly in the Melsungen-Spangenberg area.

In 1556 the first village school in Niederhessen was set up in the monastery building.

New buildings followed in the next century. From 1606 to 1608 farm buildings, the "Burggrafenhaus" and parts of the "Herrenhaus" were built. Around ten years later, from 1616 to 1619, the monastery building was converted into a hunting lodge. The builder was Landgrave Moritz von Hessen-Kassel and his second wife Juliane . The building that exists today largely dates from this period. At the end of the century, around 1690, the manor house and the park were redesigned and the orangery was built by the court architect Johann Conrad Giesler, now under Landgrave Karl and his wife Amalia von Kurland .

Between 1938 and 1940 the domain was dissolved. The first labor camp for women in the Melsungen district followed in the manor house in 1937 . The property was parceled out and given as agricultural land to farmers who had lost land due to the construction of the motorway and the establishment of the Schwarzenborn military training area. From 1940 onwards, Polish and French prisoners of war were housed in the former monastery and outbuildings. Three years later, after the devastating air raid on Kassel on October 22nd, 1943 , the "Hessische Heimat" relocated its business premises to the monastery buildings for a year after the end of the war.

In 2009 the ensemble was accepted into the European Garden Heritage Network .

Castles and palaces in Hessen in the Schwalm-Eder district