Fritzlar Cathedral as seen from the Gray Tower 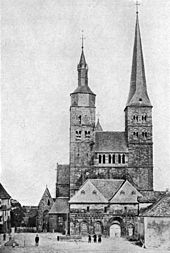 Fritzlar Cathedral around 1868 before the towers were rebuilt

The Fritzlarer Dom St. Peter is a Romanesque former monastery and collegiate church in Fritzlar in the north Hessian Schwalm-Eder district , which today serves as the Catholic parish church. The founding of the church and monastery around 723/724 goes back to Saint Boniface and became the starting point for the urban development of Fritzlar. The Fritzlar Cathedral is one of the most important historical and architectural monuments in Northern Hesse. Its predominantly Romanesque structure goes back to a high Romanesque building begun in 1085/90, which was largely renewed in the late Romanesque. Up to the 19th century, a large number of other building measures followed, the harmonious mixture of which determines the appearance of the cathedral today. Since 2004 the church has had the title of a minor basilica .

Around 722 the missionary Wynfreth / Bonifatius cut down the Danube oak, consecrated to the old Germanic deity Thor (Donar), near the already existing settlement of Geismar (today a district of Fritzlar ) , which served the Chattas as a place of worship. According to Willibald von Mainz's report , Bonifatius built an oratory (prayer house) consecrated to St. Peter around 723/724 from the wood of the Donar oak . It is generally assumed that this chapel building, which has not been archaeologically proven, already stood on the site of today's cathedral. The exact location of the Danube oak is not known. In the written tradition, two place names are mentioned: Geismar, archaeologically proven at this time, as the location of the Donareiche and approx. 1.5 km away today's Fritzlar as the location of the church later built by Bonifatius. Deviating from this, it is also assumed as a hypothesis that these locations are identical and that the cathedral stands on the site of the former Danube oak.

Wigbertbau and founding of a monastery

Around 732 it was reported that Bonifatius had a church and a Benedictine monastery built in Fritzlar , which was built and directed by Saint Wigbert as the first abbot. No archaeologically verifiable remains of this presumably stone building are known. Around 775 the monastery was elevated to an imperial abbey .

During an excavation in 1970, remains of the foundations of a previous building with a reconstructed transept width of approx. 24 m and a total length of over 23 m were discovered. This first building with a west transept and an apse adjoining it to the west was built towards the end of the 8th century or later.

In the history of the empire, Fritzlar increasingly appeared as a place for imperial and church assemblies. In 919 Henry I was elected as a king . In 1001 a royal or imperial palace was mentioned for the first time. The conversion of the monastery into a canon monastery began around 1005 . Fritzlar came to the Archdiocese of Mainz around 1066 .

During a Saxon invasion in 1079, Fritzlar and the cathedral with the monastery district were destroyed.

In 1916, during an excavation, the remains of the foundations of a very modest church building, only around 12 m wide, were found that lay above the first previous building. These remains come from a small emergency building after it was destroyed in 1079. Until the older predecessor was discovered around 1970, the remains of the building, which were first excavated in 1916, were mistakenly regarded as the Boniface building .

Around 1085/1090 the construction of a three-aisled basilica with a flat-roofed nave , a broadly projecting east transept and a flat, closed choir began. There was a three-aisled crypt under the crossing and the long choir , which has been completely preserved and was originally accessible from the central nave. Later, in addition to the main crypt, side crypts with eastern apses were built next to the transepts , of which the northeastern side crypt has been preserved. The current floor plan of the cathedral is given by the high Romanesque building, of whose outer walls the lower parts of the north transept up to a height of approx. 4 m as well as parts of the north aisle wall were used, which can be recognized by the hammer-straight layered masonry made of smaller blocks.

In the west, the two west towers were built, between which the royal gallery is located inside . After a change of plan, the originally planned two-tower facade was redesigned by adding an additional transverse storey above the gallery to a western block based on the Saxon model. The west bar with the towers is completely preserved with the exception of the renewed spiers and forms the largest remaining contiguous construction section of the High Romanesque building I, which was probably completed by 1118. The lower part of the west facade is now covered by the vestibule.

Late Romanesque choir apse seen to the east, around 1195

Archbishop Christian I of Mainz found the cathedral in such a bad condition during a visit in 1171 that he ordered its restoration, which amounted to a largely new building. The previously flat-paneled choir and the main crypt were extended by a polygonal choir apse, which is structured by a profiled base and corner pilasters and ends with a dwarf gallery above the large arched windows. Even the Romanesque roof structure erected in 1194 over the adjoining Langchorjoch has been preserved in its original form, the timbers of which are dendrochronologically dated to the year of fall 1193. Parts of the old transept walls were reused for the transepts.

The high quality of the Fritzlar Choir indicates the work of builders from Worms. The late Romanesque Fritzlarer Building II shows a close relationship to the Worms Cathedral and other works of the so-called Worms Building School , with which stylistic elements of the Rhenish Romanesque were imported to North Hesse for the first time . The exterior of the Fritzlar choir apse was soon copied at the St. Paul choir in Worms . The basilica, which had previously had a flat roof, was now given a continuous vault with cross-shaped ribbed vaults . Using the old aisle walls, a new central nave was built in the bound system , in which two cross-arched aisle yokes are assigned to a central nave yoke in the floor plan. In the nave, the increasing stretching of the yokes to the west and the high domical vaults with partially warped ribbon ribs are striking. With the redesign of the west gallery, the late Romanesque building was probably finished before 1232.

After 1253, the Elisabeth Chapel was built in front of the west facade, today's vestibule, also known as “Paradise”, in the Westphalian-influenced late Romanesque-early Gothic transition style with numerous figurative capitals, the representations of which, however, cannot be interpreted. The two-aisled vestibule also served as a legal venue . The Elisabeth chapel was completed by 1267 at the latest, on which an upper floor with a steeply rising roof was added in the Gothic style.

From the 1290s, the Romanesque south aisle was replaced by two Gothic aisles, with the south south aisle being used for the installation of chapels. It was followed by the three wings of the cloister and the monastery building, which today houses the treasury and the cathedral library. The cloister was completed by 1323 at the latest. The Gothic sections of the cathedral were probably built parallel to the construction of the Fritzlar Minoritenkirche (Franciscan monastery church) . Large tracery windows were let into the transepts and individual wall fields of the choir apse, and a small archive room was built above the north-eastern side crypt. After 1358, a large wooden crossing tower was built over the crossing , which reached the height of the western towers and was there until 1799. The two west towers had also received very tall and pointed spiers at an unknown point in time. The Marienkapelle attached to the north transept was donated in 1354, but was not completed until 1365/1366. The late Gothic nave roof truss was built between 1489 and 1494.

High Romanesque north-eastern side crypt (below), Gothic archive room (center) and Renaissance half-timbered extension (above, around 1560)

Around 1560, a Renaissance half-timbered room was built on the archive room above the northern side crypt. The baroque style of the interior began in the late 17th century . In 1731 the west porch was given a simplified upper floor with low roofs. In 1735, the vestibule called "Red Neck" was added to the north aisle.

After the Reichsdeputationshauptschluss and the secularization of 1803 the Fritzlarer Stift was abolished. The cathedral now served as a pure parish church . Between 1822 and 1828 the stump of the crossing tower received a neo-Gothic redesign and a pyramid roof, the tip of which protrudes about 10 m above the roof ridge. In 1854 the architect Georg Gottlob Ungewitter restored the Gothic Lady Chapel.

As a result of the long neglect of the cathedral, a catastrophe occurred on December 7, 1868, when a very strong gust of wind tore down the dilapidated high south tower spire during mass. The spire and pieces of wall fell on the nave and partially penetrated the vaults, resulting in 21 deaths and a number of injuries. When repairing the spiers, the architect Carl Schäfer standardized the previously different tower helmets and replaced them in 1873 with two identical diamond-shaped helmets with previously non-existent triangular gables. In 1878 a new Romanesque redesign of the north aisle wall followed , in which the severed round arch friezes were restored and a base profile and a pilaster structure were also attached.

After a long delay, a comprehensive restoration began in 1913, which, due to the First World War, dragged on until 1919. The originally planned neo-Romanesque design and purification of the interior were abandoned and the old color versions and paintings found were restored. Other major restorations took place from 1963 to 1970 and a longer restoration campaign from 1980 to 1997.

In 2004 the church was raised to the rank of minor basilica by Pope John Paul II . From June 2010 to November 2012, the interior was renovated in three construction phases. Among other things, the chancel was redesigned, the heating system renewed and handicapped accessible access created.

In the interior, the Gothic shrine of St. Wigbert from 1340 in the main crypt, the Gothic tabernacle and the Romanesque relief of St. Peter with a key from the 12th century should be emphasized . Otto Linnemann from Frankfurt created glass windows in several stages from 1914 to 1926 . According to the catalog of works, among other things, two windows with depictions of St. Martinus and the rose miracle of St. Elisabeth as well as 14 high-bay windows.

In the cloister is the Cathedral Museum, whose showrooms show paintings, sculptures, sacred objects and other evidence of the monastery history from the Middle Ages to the present day. The most famous exhibit of the cathedral treasure is the Heinrichs-Kreuz , which was donated to St. Petri-Stift by Emperor Heinrich II in 1020 . The Roman crux gemmata among the most important works of German medieval art treasures. Parts of the former monastery library have been preserved in the cathedral library.

Today's cathedral organ, including the baroque-looking case, was built by the organ builder Johannes Klais in 1929 and extensively restored in 1995. The instrument has 45  registers .

In the towers there is a loud peal of eight bells . Five of them come from the Middle Ages, one from the Baroque period, and two modern bells complement the historically evolved sound. The bells in the north tower hang in a wooden belfry on wooden yokes. The bells in the south tower hang in a steel bell cage on steel yokes, with the steel yoke of the large Martin bell being slightly cranked.

The writer Heinrich Ruppel wrote about the Fritzlar Cathedral: "Fritzlar with its beautiful cathedral rises above the Ederstrom."