The castle Züschen is a Outbound castle in the southeast of Fritzlarer district Züschen (Obertor 18) in the Schwalm-Eder district in Hesse . Nothing has been preserved from the former castle complex. It was not far south of today 's Garvensburg Castle .

The formerly independent town of Züschen belonged to the County of Waldeck for centuries and was presumably given town charter in 1322 . In 1433, the castle and town were given to the Lords of Meysenbug as a fief , which they held until the family died out in 1810. Above the castle complex on the southeast corner of the town fortifications , which was probably partially demolished and built over around 1600, they built a stately manor with a stone, castle-like mansion in the north of the courtyard, which still exists today with all sorts of structural changes and as an old castle referred to as. 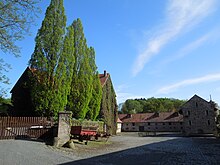 A floor plan with a description has been preserved in the Kassel University Library , which describes the castle shortly before its renovation. This means that it can be located in the center of today's manor. On the left side of the drawing is the “thor to the church”, at the lower end of the castle the “Zwinger wall”; they give the necessary clues.

Two spiral staircases led into the rooms of the extremely irregular building, which was probably built at different times. The utility rooms were probably located on the ground floor .

On the opposite side of the courtyard, massive kennel walls hold the slope to the southeast. Further stables and farm buildings supplemented the old facility to form a spacious courtyard. Since an exact dating of the drawing seems almost impossible due to the lack of files, it is assumed that the planned construction work was related to the construction of the church by the von Meysenbug in 1604.

Castles and palaces in Hessen in the Schwalm-Eder district