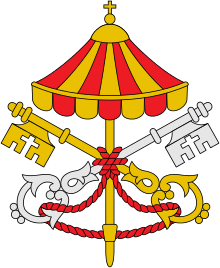 The insignia of the Apostolic Chamber consisting of the Petrine keys and umbraculum .

In the eleventh century the term camera thesauraria came up for the financial management of the Curia and the administration of the temporal goods of the Holy See . At the head of this authority was the Camerarius in the twelfth century . In this office, the tasks that were previously assigned to the Vestiarius , Vicedominus , Arcarius and Sacellarius were combined. His office has not ended with the death of the Pope since the 13th century. In the 13th and 16th centuries, various judicial functions were added, not only in tax matters, but also in certain criminal and civil matters. Urban VI. expanded in 1379 the jurisdiction of the Camerarius in all cases that, albeit indirectly, affected the rights and interests of the Chamber. The camerarius was often a cardinal , but it was not until the fifteenth century that the office was always occupied by a cardinal, from that time on he also had a permanent deputy, the vice camerarius (later also the governor of Rome). The number of clerici camerae who supported the incumbent , known as the Camerlengo, fluctuated over the centuries. Eugene IV summarized them in a college and gave them their first statute on July 6, 1444.

In the 13th century, the Thesaurarius was responsible for the tasks related to income, asset management and payments . In order to lead processes, the office of Auditor Camerae was created at the same time , whose area of ​​responsibility was expanded by Innocent VIII in 1485, furthermore - after a brief abolition of the office under Paul III.  - 1562 by Pius IV and later popes.

Dicasteries of the Roman Curia