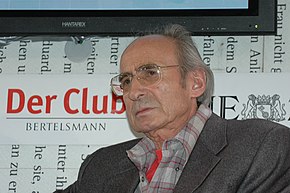 Peter Rühmkorf grew up as the illegitimate son of the teacher Elisabeth Rühmkorf , an Otterndorf pastor's daughter, in Warstade (today part of the city of Hemmoor ) near Stade . His father was the puppeteer Hans Westhoff. Peter Rühmkorf was a godchild of Karl Barth . In 1951 he passed his Abitur at the Athenaeum Stade . From 1951 to 1956/57 he first studied education and art history, later German and psychology in Hamburg . After a few semesters, Rühmkorf gave up his original goal of studying to be a primary school teacher and dropped out. According to him, a conflict with his professors should have been the cause. 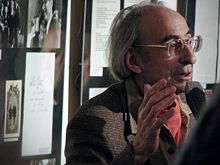 Together with the poet and essayist Werner Riegel , he self- published the hectographed literary magazine Between the Wars from 1951 until his death in 1956 . This was at the same time the lyrical and political platform of “ Finism ” and, in retrospect, an important series of issues from those years. Rühmkorf was one of the founders and main author in the student courier , which was significant for the young "resistance" intelligentsia of the 1950s. He later published in the follow-up magazine Concrete .

From 1958 to 1964 Rühmkorf worked as a publisher's editor at Rowohlt Verlag . Since then he has been a freelance writer and poet in Hamburg. Rühmkorf often performed his own poems in public, sometimes with jazz accompaniment from Michael Naura and Wolfgang Schlüter . In 1966 he took part in a jazz and poetry event on Adolphsplatz in Hamburg. He received numerous literary prizes and was a frequent guest lecturer at German and international universities. From 1969 to 1970 he was in Austin (Texas), 1977 in Essen, 1978 in Warwick, 1980 in Frankfurt am Main and Hanover, 1983 in New Hampshire and 1985/86 in Paderborn. In the 1960s, Rühmkorf also worked as a dramatist, but the three plays that were created at that time were not very successful - especially because of the political constellations in both parts of Germany. In 1972 he published his autobiography The Years You Know . 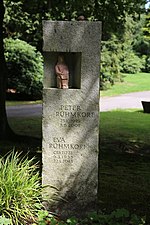 Grave of Peter and Eva Rühmkorf

In 1964 he married and the psychologist Eva Titze (1935–2013), who worked as the head of a penal institution, gender and culture politician and as a minister in Schleswig-Holstein . They lived in Övelgönne in the Hamburg district of Othmarschen since the early 1970s .

Peter Rühmkorf died of cancer on June 8, 2008 at the age of 78 in Roseburg, Schleswig-Holstein, where he last lived. His urn grave is in the main cemetery in Altona .

Rühmkorf's estate is in the German Literature Archive in Marbach . Parts of it can be seen in the permanent exhibition of the Modern Literature Museum in Marbach.

Since the 1950s, Peter Rühmkorf has been attentive, critical and polemical to contemporary history, the cultural scene and developments in literature, especially poetry, with his sharp-sighted and sharp-tongued comments. His essays and speeches prove him to be the heir of the Enlightenment and a fighter for the “high wire” act of combining enlightenment-political goals with the demands of poetry and the rights of the individual.

What the critical works demand, he tried to meet with poetry. His language comes close to artistry: ambiguous language game, puns, amazing rhymes, thought acrobatics, surprising images. Rühmkorf's versatility is the same as that of his literary ancestor Heine, it is the “intellectual-political contraband”. Rühmkorf combines brilliance with borrowing from the poetry of the people, which he has collected and published in its varieties. He is known as an “artistic folk singer”, “witty enlightener”, “subversive linguistic virtuoso” who tells us today's “enlightened fairy tales”. He showed what poetry can be today: “a utopian space in which you can breathe more freely, feel more intimately, think more radically and still feel more coherent than in the so-called real world”.

In the poetry of the 1980s and 1990s, he refuted his work title from 1979, "Durable until the end of 1999". After the fall of the Wall, he opened up a new genre in his diaries between time criticism and autobiography.

On his 75th birthday (2004), the Hamburg Museum of Art and Industry presented an exhibition on the work and life of Rühmkorf Revue - a picture sheet for the 75th . The approximately 850 exhibits gave a historical insight into the poet's extensive private archive.

For the 80th birthday of the writer, the Arno Schmidt Foundation in Bargfeld organized a conference in conjunction with the Nordkolleg Rendsburg from October 22nd to 25th, 2009. The Free Academy of the Arts in Hamburg dedicated a memorial evening to its long-standing member on this occasion: “Friends read Rühmkorf”.

In 2019 the Arno Schmidt Foundation is organizing the exhibition “Let shine! Peter Rühmkorf on the Ninetieth ”, which will be on view from August 21, 2019 to July 20, 2020 in the Altona Museum in Hamburg and then in the Schiller National Museum in Marbach. In July 2019, following his request, a step on the Joachim Ringelnatz staircase in Hamburg-Othmarschen was marked with Peter Rühmkorf .

Appeared during his lifetime